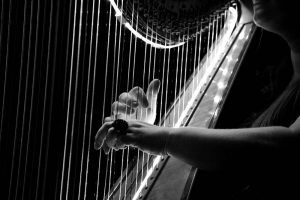 Tá tráthnóna specialta cheoil, eagraithe ag Gaeilge Bheo arís i mbliana I Fota House
This year’s special guests are Laoise Kelly, Harpist and Mossie O Scannláin, a singer from the West Kerry Gaeltacht.
Laoise Kelly from Westport, Co. Mayo, now living on Achill Island, is regarded as “the most significant harpist of her generation” – Nuala O’Connor. She has pioneered a new style of driving instrumental harping showcased in her three critically acclaimed solo album
Throughout her solo career she has recorded on over 60 albums with many of Ireland’s foremost artists including Seamus Heaney, The Chieftains, Christy Moore, Sharon Shannon, Dónal Lunny, Tommy Makem, Matt Molloy, Tommy Peoples, Mary Black, Maighread & Tríona Ní Dhomhnaill, as well as Kate Bush and American country/bluegrass icon Tim O’Brien.
Mossie O Scannláin is from the Dingle peninsula in the Kerry Gaeltacht, and is blessed with a most musical and pleasing voice. He will sing songs in his native language from that area. Sure to be a real treat. He has recorded two successful albums of his songs.
The annual Oíche Cheoil this year is in FOTA HOUSE Carrigtwohill on 23rd August 2017 óna 7.15 PM go dtí 10.00 PM.
Tickets at €15 each are available and can be reserved by contacting 021 4613222. Finger food at intermission is included in price.

Ironman Weekend – Plan Your Journey and Allow for Extra Time

Colbert & Co Midleton Nominated for The Cork Estate Agent of...

Coffee Morning in aid of Relay for Life – Irish Cancer...