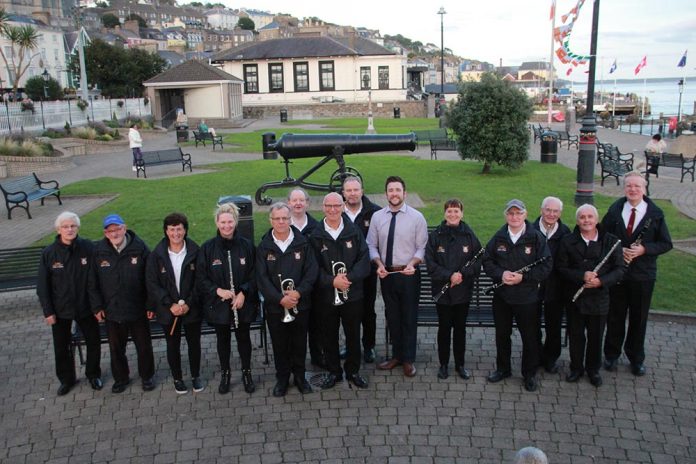 Cobh Confraternity Band celebrated its 50 year anniversary at a special dinner event held at the Commodore Hotel, Cobh this past Friday, 20 October.
The 50th anniversary celebrations drew a large attendance despite the weather warning necessitated by Storm Brian impacting travel plans.
“It was a great night,” said John Crowley, Secretary of Cobh Confraternity Band. “The atmosphere was excellent. We had 63 or 64 people there. We could have had 75, but with the weather warning travelling was an issue and 11 people were understandably too nervous to drive. Presentations for 50 years of continuous service were made to Declan Kennedy and Robert Ahern who were with the band since the beginning.”
The event included a meal and a special speech by Captain Michael McCarthy, marketing manager of the Port of Cork Company, who is a founding playing member of the group.
“Captain McCarthy from the Port of Cork was the guest speaker,” said Mr Crowley. “He was with the band from the very start too, so it was appropriate for him to be the guest speaker. He gave a very interesting talk on how important the band is for the cruise liners and what it was like when it was starting off. He gave great insight into those years.”
Formally known as Cobh Confraternity Brass and Reed Band was founded in 1967 to provide music for Catholic Church functions in Cobh. The band’s repertoire expanded and soon the group were regularly performing in concerts, at fundraising projects, parades, festivals and sports meetings. Some of the special events for which Cobh Confraternity Band performed include the centenary ceremonies for the Titanic and Lusitania liners and the Australia Day festivities in Cobh, the FAI Cup Semi-Finals between Cobh Ramblers and Sligo Rovers, and the homecoming for Cobh’s track and field Olympian Sonia O’Sullivan.
The band are best known for their performances for some of the many cruise liners which visit Cobh each year.
“The band is in training now for the New Year,” said Mr Crowley, “though we have a few performances for Christmas. There are 97 ships scheduled for Cobh next year and we will be playing a big proportion of them. We would love to play for home all, but some would be coming in very early on the day or late at night. Being realistic we will play for between 40-45 of those ships, when usually we play for 32 out of 70 ships each year.”

Carrigtwohill Camán Till Dawn a Huge Success Despite the Overnight Rain

No Fly Zone Imposed Over Castlemartyr Woods As Search Continues For...

Cobh will be a Sea of Colour on the 6 August