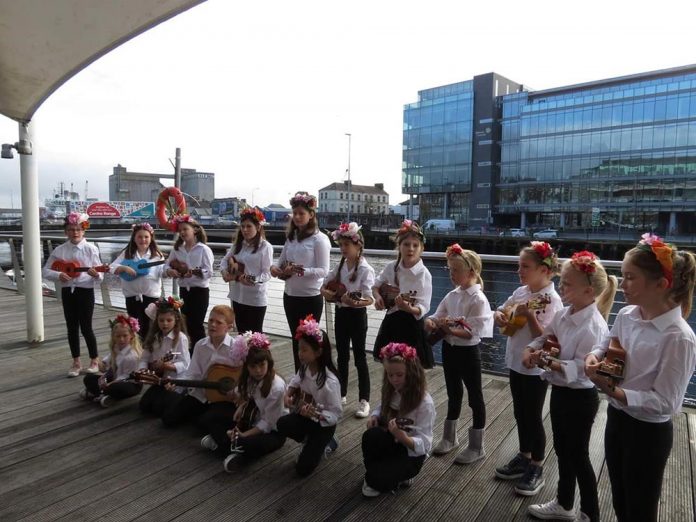 The School of Uke, which is run out of Scoil Íosagáin, Aghada National School, were incredibly popular at the regional auditions for this year’s The Late Late Toy Show this past Monday, 23 October.
The ukulele orchestra, which is East Cork’s youngest ukulele band, was one of hundreds of children auditioning to play a part in this year’s toy show, which will air on Friday, 1 December. The first of three days of closed auditions was hosted by the Clayton Hotel in Cork, with other regional auditions held in Galway and Mullingar.
The school of Uke submitted a video in September as a successful entry request for the regional auditions. Then on Monday the group sized the opportunity to perform for and impress Ryan Tubridy, now the host of The Late Late Show for nine years.
“The children had mighty craic with Ryan Tubridy on the day,” said Debby Hayes, who helms the School of Uke. “He chatted and danced with them and there was gas banter. I am so proud of each and every one of these kids. They are a credit to themselves and to this community. Our youngest member, seven-year-old Aoibhionn was swept up into Tubridy's arms and was absolutely delighted to be in the centre of all the excitement. It was a day that her and her band members will remember forever."
The School of Uke began some years ago, originating from the request of one student of Scoil Íosagáin NS to learn the ukulele, which was acquiesced by her teacher Ms Hayes.
“The School of Uke started a few years ago at Aghada National School,” said Ms Hayes, “when Kyra Owers, now in first year in St Colman's Community College, Midleton, took an interest in the ukulele. Kyra began to flourish into a very competent ukulele player and singer and would often play at assembly in school. Many of the kids in Aghada National School admired Kyra and her ukulele playing and before we knew it we had children who wanted to learn how to play too. Very organically, the group grew quickly and before we knew it we had a group. They practice at lunch time in school and play gigs in the community.”