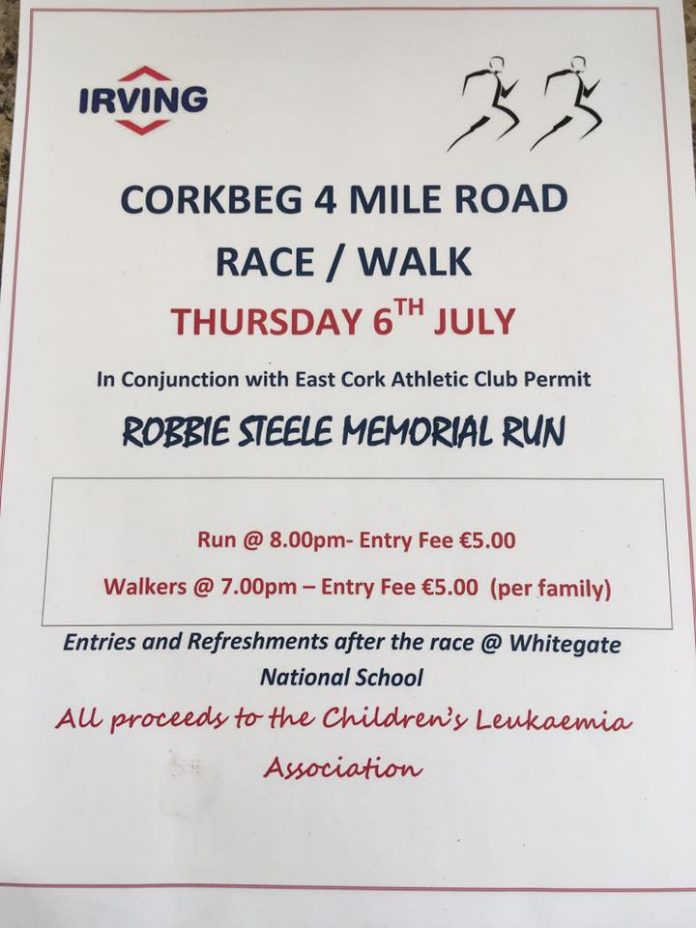 The annual Robbie Steele Memorial 4 Mile Road Race, formally the annual Corkbeg 4 Mile Road Race, takes place next week, Thursday 6 July.
Registration will be taken at Whitegate National School prior to the race, which sees walkers begin at 7pm and runners at 8pm. The entry fee for each is €5, with proceeds from the race going towards Children’s Leukaemia Association, Cork.
The event, renamed in honour of Robbie Steele, who passed away following a car accident in 2014, will be held in conjunction with East Cork Athletic Club and takes place in Whitegate.
“It’s the Annual Corkbeg 4 Mile Race held in conjunction with East Cork Athletics Club,” said Ollie Steele, “which is now being run in the memory of our late son Robbie. People can register at the school on the day and return post-race for refreshments which are being kindly provided by the local community and the Whitegate Residents’ Association.”
The previous year saw hundreds of athletics partake in the four-mile event, which was then fundraising for East Cork Rapid Response and Motor Neurone Disease.
Mr Steele explained the change in this year’s beneficiaries from the race: “I know a few young people with leukaemia,” he said, “and that is why were are fundraising for CLA Cork at the moment as that is the group supporting them.”
Prizes will be given to the first four individual men and women, with category prizes award to the first and second men in the over-45 and over-40 categories and the first man in the over-50, over-55 and over-60 categories. The first and second women in the over-40 and over-35 categories will received prizes, as will the first woman in each of the over-45, over-50 and over-55.