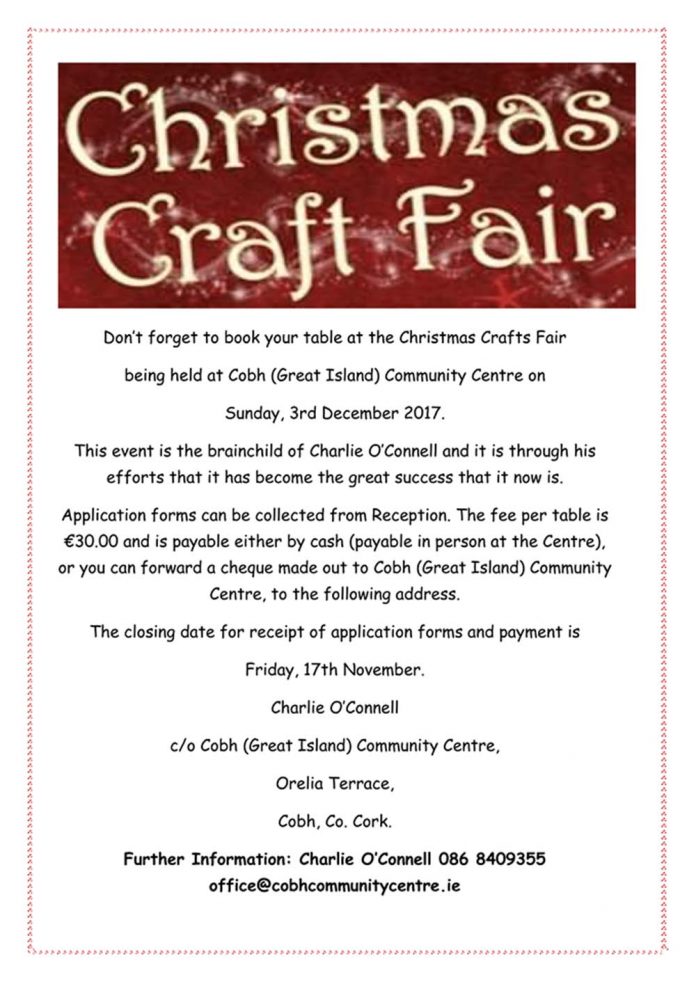 Applications to hold stalls at this year’s Christmas Crafts Fair in Cobh are now being accepted.
The ninth annual Christmas Craft Fair is set to take place on Sunday, 3 December with applications to hold a stall now accepted. Forms are available at the fair’s host venue, Cobh/Great Island Community Centre, and the fee per table is set at €30. The fee is payable by either cash or cheque, with the closing date for receipt of application forms and payment set for Friday, 17 November.
“Exhibitors will be coming in for 9am to set up and the fair will be open to the public from 11am until 5pm,” said Charlie O’Connell, who has organised every iteration of the fair. “You can book a table for €30 either through my number or at the community centre during office hours. I have 10 or 12 already, just the regulars.”
Last year’s event had a very large turnout with approximately 600-to-700 visitors to peruse the plethora of Christmas-themed gifts and accessories on offer, such as cards, cakes, treats, wreaths, knitwear, sewing, jewellery, woodwork projects, etc., with a similar selection of items expected to be on offer again this year.
“We hope to have around 35-40 stalls selling all the run-of-the-mill stuff,” said Mr O’Connell. “Teas and coffees are served all day, along with sandwiches and Christmas pies and so on. You name it, we have it. We will have the fun bus in the car park for children, which will be supervised so the parents can look around. We may have a bouncy castle too and Santa will be doing his rounds in the afternoon.”
This year will again feature a free-to-enter prize draw each hour, along with a main draw towards the end of the evening.
“There will be a draw giving out spot prizes every hour on the hour,” said Mr O’Connell, “at 12pm, 1pm, 2pm, and 3pm. People look forward to it every year. The prizes may just be a bottle of wine or a box of chocolates, but it’s free as we give out tickets to people on their way in. We have the main draw then at 4pm where we’ll give away two hampers and a €50 voucher.”
Baring extreme inclement weather, the Christmas Crafts Fair will run for a ninth consecutive year in Cobh this December.
“It is the ninth year now,” said Mr O’Connell. “We have run it every year. Even the year we had the frost we didn’t skip. We had snow and ice on the roads and you know what? It was the best year we had.”
For further information on or to book a stall at the Christmas Craft Fair, email office@cobhcommunitycentre.ie or call Mr Charlie O’Connell on 086 840 9355 during business hours.

Fury As Unwanted Microwave Is Dumped On Midleton Grave

An Invitation to Celebrate 20 Great Years with Cumann na Daoine...