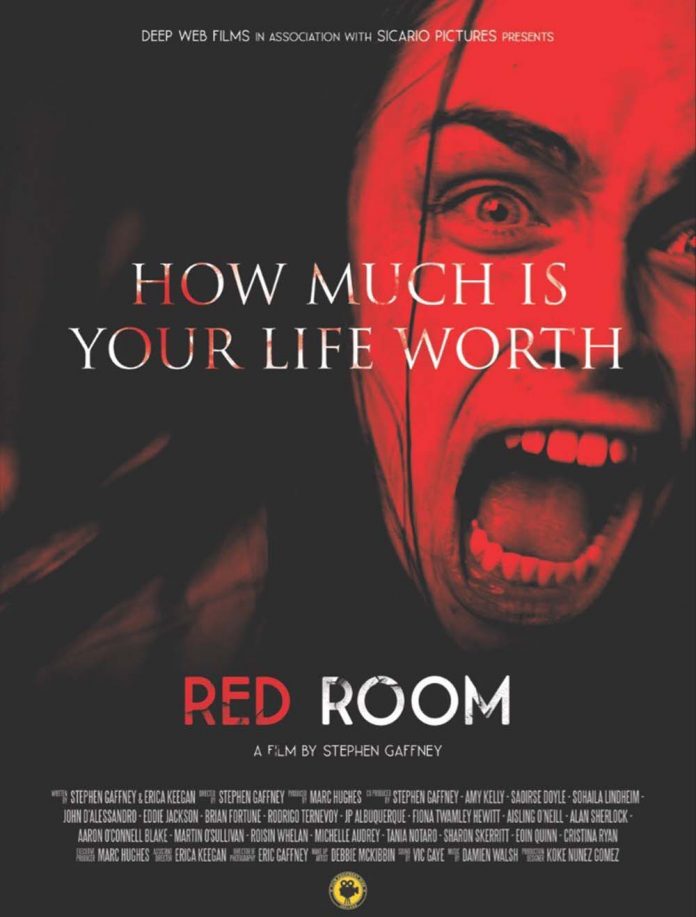 The only screening of an award-winning new horror film to take place outside of Dublin will be held in Midleton this coming Wednesday, 8 November.
Red Room will be screened for one showing only at the Gate Cinema, Midleton at 7pm next week, with tickets on sale now. The film, produced by Sicario Pictures, the production company of Castlemartyr’s Marc Hughes, was first screened at cinemas in Swords and Dundrum in Dublin on Halloween, this past Tuesday, 31 October.
“Irish filmgoers have never seen this kind of film before,” said Marc Hughes, producer and executive producer of the film. “I believe we are after setting a milestone in Irish filmmaking. As a film producer from Cork I am very proud to have Red Room screened in my local cinema and I hope it will be well supported next week. It is hard-hitting 18s movie and it will test the boundaries of cinema goers. I believe Red Room is an Irish cult classic in the making.”
The tense, unsettling horror film follows three young women, Kyra (Amy Kelly, Red Rock), Alison (Saoirse Doyle, Class-A), and Lily (Sohaila Lindheim, Class-A), who were abducted and held captive in a secluded house in rural Ireland. Locked inside and under constant surveillance, the three girls must attempt to escape their kidnappers before it is their turn to enter the eponymous red room. The film is officially certified 18 for strong violence, drugs, sex/nudity and language.
The film, directed by Stephen Gaffney, stars a host of actors well known to Irish audiences such as Brian Fortune (Game of Thrones), Eddie Jackson (Game of Thrones), John D’Alessandro (Cardboard Gangsters), Aisling O’Neill (Fair City) and Rodrigo Ternevoy (Fair City).
The story, co-written by its director Mr Gaffney and Erica Keegan, is based on the Red Room urban legend, in which the red room is a hidden website or service on the deep web/dark net which allows people to view and participate in interactive torture or murder –the equivalent of the snuff film myth retooled for the internet age.
Red Room was made without funding from the Irish Film Board, had a budget of €40,000 and was completed in a year and a half. The film opened this year’s Open Underground Cinema Film Festival and won the Special Jury Prize at the same event. The US and Canadian distribution rights for Blu Ray and Video-on-Demand services have been sold to Wild Eye Releasing, with talks still being held with distributors for Ireland, the UK and other areas of Europe.

Public Debate in Youghal Supports Greenway and Railway for the East...