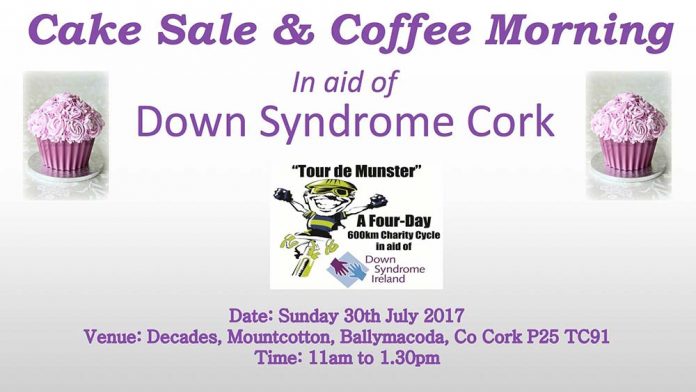 Ballymacoda hosts a Cake and Coffee Morning this Sunday, 30 July to raise sponsorship money for Ray Connolly who will participate in this year’s Tour de Munster 2017 in aid of Down Syndrome Ireland and individual beneficiaries.
The Cake and Coffee morning runs from 11am-1pm in Decades, Mountcotton in Ballymacoda and was organised by the friends of Mr Connolly as part of his fundraising effort for the Tour de Munster 2017 (TdeM’17).
East Cork is strongly represented among the 100+ participants of the TdeM’17 with Midleton, specifically Hurley’s Supervalu, designated as the first stop on the route, for between 10-11am on Thursday, 10 August.
“We are very grateful to the people of East Cork for their support throughout the history of the Tour,” said Paul Sheridan, founder and organiser of the Tour de Munster. “In fact this year we're adjusting the route to make Midleton our first stop on the route. This is because we have a lot of locals involved, including Mark Sinclair of the Midleton Fire Service with his business An Rothar providing mechanical support. Other East Cork locals include Mick O'Shea (Midleton), Jason Bane and his son Cathal (Midleton), Frank Savage (Carrigtwohill), Padraig Hennessy (East Ferry), Sinead Ivers (Ballycotton), Annemarie O'Brien (Knockraha) and Nichola Power (Cobh).”
The 17th annual TdeM’17 was officially launched at Bunratty Castle, Co Clare last month, with this year marking the 8th successive year the four-day, 600km charity cycle will be held for Down Syndrome Ireland (DSI).
DSI is an organisation of people with Down syndrome and their parents and guardians which was established in 1971. It has over 3,000 member families with 25 branches nationwide and is funded by voluntary contributions and events organised by its members. It is the biggest single group concerned with the welfare of people with a learning disability in Ireland. This year’s TdeM’17 also affords participants to select their own beneficiary for which they can raise funds and awareness.

54 New Secondary School Spaces For East Cork But More Are...