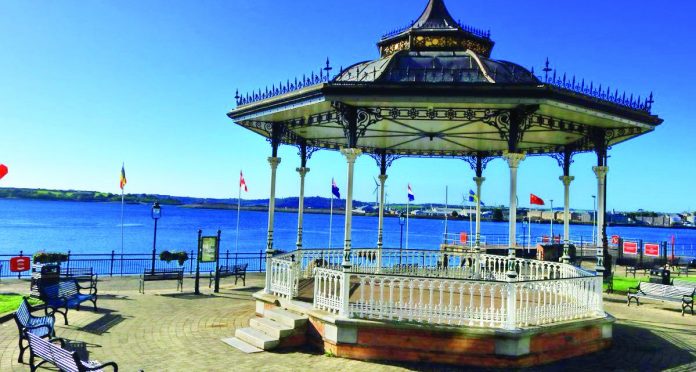 Cork County Council have ruled out extending their report on the closure of Battery Strand, to other parts on the Cobh Coastline.

The Local Authority is to lodge tender documents this month to employ an Engineering Consultant to review the stability of the cliff face adjacent to the Strand.

The Battery Strand, close to the Titanic Garden near the Holy Ground, Cobh, was permanently closed last summer. The Local Authority took the move to permanently weld the access gate shut following fears for public safety, after numerous attempts to restrict access over the past 4 years have failed.

A report by Malachy Walsh and Partners in 2014 on walls and slopes across the Island found that the Battery Strand cliff was among a number of locations in the town that were in immediate danger of collapse, and strongly urged that access be restricted.

The Cobh Municipality, at their December Sitting, approved the proposal for a review of the cliff face with an agreement that the Borough would pay for the investigative work if funds could not be sourced elsewhere.

The Authority’s Coastal Management Directorate has confirmed that there are no resources available to carry out the works, leaving the local Municipal District to foot the bill.

Speaking at a recent Sitting of the Southern Committee Councillor Diarmaid O’Cadhla said he was “disappointed that Cobh is to shackle the cost of the Report when the Municipal District is on a limited budget which is already over prescribed.”

The Independent Cllr said he wants to have the scope of the review extended to the Bench which would be a massive attraction for the town.

The Irish language activist said “the whole front is in a terrible state of disrepair, with rubble there for decades due to cliff collapse and so on.”

Labour Cllr Rasmussen said the decision was made to cover the cost of the works “because it was more important to get the job done than haggle over funds.”

He said the Town has a fabulous tourism industry, taking “exception” to Cllr O’Cadhla’s comments.

“We have a fabulous tourism industry in Cobh and the waters remain active. We are not a rundown area with piers falling apart. We are a coastal area and we do have areas where piers are not 100%, just like every other area in the County has, but I would say we are working towards them.”

A Senior Executive from the County’s Coastal Management Department said “by taking a long section of coastline the Study becomes unwieldly.” He said he would recommend the Study would concentrate on the Battery Strand cliff face and slip area close to the Sea Scout hall.