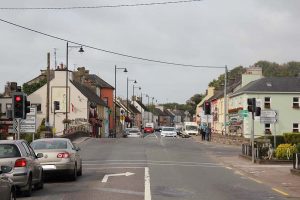 Plans for a new pedestrian bridge in Castlemartyr are believed to be at an advanced stage.
Pedestrians in the village often run the risk of being run over by vehicles as there are few crossing points along the busy N25.
The local authority say it has agreed in principal, the acquisition of lands required to construct the footbridge.
Draft plans which would ensure accessibility for those on foot, the elderly and people with special needs have been drawn up, however discussions are continuing with some landowners.
Communication seen by the East Cork Journal shows that “on the basis that a favourable outcome will be received” input from the community will be sought before approval for planning is pursued.
Cllr Danielle Twomey who has welcomed the progress said for many years people living on the Killeagh side of Castlemartyr, have felt disconnected from the village centre.
“There has always been a great need for a pedestrian bridge, as those living on the Eastern end of Castlemartyr feel a disconnect from the main village. The footpath on the bridge is too narrow, people with disabilities and those pushing prams are unable to use it. People are being forced out onto a busy N25.”
The Sinn Fein Cllr added “with a pedestrian bridge it would mean more people could have safer access to village centre facilities."

Trivia Night for Kate Flynn and Breaking the Silence set for...

Fota Wildlife Park and Eagle AC announce Thursday 18 May as...