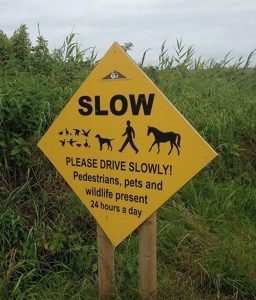 Since an article appeared in last week’s East Cork Journal a number of companies have pledged to replace a series of stolen road signs along a stretch of East Cork beach.
Earlier this month thoughtless thieves removed a number of road signs erected by the Ballynamona Clean coast group encouraging motorists to slow down.
The environmental group reported the theft and subsequent burning of the three corrugated plastic signs and wooden stakes to the Gardaí.
The road signs were erected almost twelve months ago urging the motoring public to exercise caution as pedestrians, pets and wildlife were present 24/7.
Ballynamona Clean Coast Spokesperson Proinsias O’Tuama estimated the cost of replacing the signs in excess of €400.
The group went on a media campaign after the “Please drive slowly” signs were removed from a 2 metre wide access road to Ballynamona beach on Saturday 12 August.
The vandals had later used the signs for a bonfire.
Fed up with speeding drivers the environmental group had erected the Foamex signs along the 1 mile route with permission from the local authority.
The area which is designated a special area of conservation was also heavily littered following the late night party.
Pictures of the Rubbish ridden beach along with a debit card receipt for Alcohol from the Top of the Hill off licence in Gurranabraher was discovered in the litter.
While the person who purchased the alcohol is responsible for its disposal, the Top Of The Hill Off Licence told 96 FM’s opinion line they would be more than happy for Gardaí to see the CCTV footage, if it would assist them in their enquiries.
Colin Tobin of the neighbouring Top Of The Hill Bar, a separate entity to the Off Licence told the radio show, he would be happy to replace the road signs as a gesture of goodwill.
While Optima signs where the original safety warning were purchased said they will upgrade the new signs to aluminium at no extra cost.
Speaking to the East Cork Journal Mr O’Tuama said “while this is a good news story, it’s an unnecessary good news story.”
He said inspectors were confident the information provided to the Gardaí will result in a fine being issued.