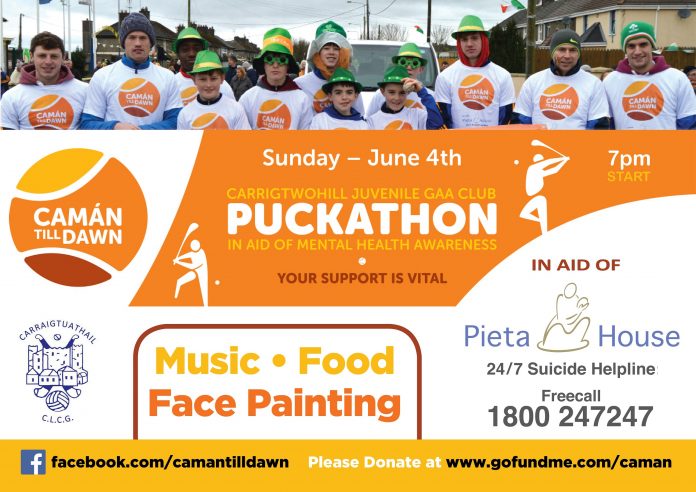 Carrigtwohill Juvenile GAA Club will run an overnight puckathon this Sunday, 4 June to raise money for Pieta House.
The Camán Till Dawn will take place from 9.45pm on Sunday, 4 June and run until dawn at approximately 5.17am on Monday, 5 June, with the aim of fundraising for Pieta House and, the event’s main focus, raising mental health awareness in general.
The puckathon will take place in the ball alley at the GAA club grounds in Carrigtwohill and will feature current, retired and non-players of the club continuously pucking the sliotar overnight. It is hoped to have some well-known people from the GAA community in attendance on the evening, which will also feature entertainment with music, food, face painting and more.
The event is part of a wider mental health awareness initiative that is being undertaken by Carrigtwohill Juvenile GAA Club this year which stems from the club and village’s history with suicide.
“Sadly,” said David Sullivan, Public Relations Officer for Carrigtwohill Juvenile GAA Club, “three former members of Carrigtwohill Juvenile GAA Club have died by suicide during the last three years. The key focus of this event is something that is close to the hearts of many people in Carrigtwohill and much further afield. The idea for the event was conceived on a dark winter’s night at a committee meeting in the club rooms, with a lone senior hurler in the adjacent ball alley pucking a sliotar as the meeting progressed, not long after the death of a young man by suicide.”
Mr Sullivan said that as the GAA is so well known for fundraising for its own ends that it is a great initiative to utilise the organisation to raise funds for charity. So far a number of well-known people have given their support to the Camán Till Dawn including Seán Óg Ó h’Ailpín, Brendan Maher, Jackie Tyrrell, the Cork senior hurling team, Gemma O’Connor, Valerie Mulcahy, Ruby Walsh, Mick Galwey, Simon Coveney and many more.
“A staff member of Pieta House said something in conversation that resonated with me,” said Mr Sullivan. “It was along the lines of the fact that there would be no Pieta House without a strong community. It is run and funded by the same community it serves and strives to help. In that regard, Pieta House and the GAA are a good fit. The same core ethos - of being community based, focused and run, with the net benefit accruing to the community - runs through the heart of each organisation.”
Pieta House has an annual expenditure of approximately €10m and is reliant on approximately 87% (or about €8.7m) of said figure coming from charitable donations. Those partaking in the event have sponsorship cards that can be filled in and there will be collection buckets present during the event.
The Camán Till Dawn has its own GoFundMe page for Pieta House, available at www.gofundme.com/caman.
If you or someone you know needs someone to talk to contact the Samaritans on 116 123. Pieta House in Cork can be contacted at 021 434 1400, while 1life, a 24 hour suicide prevention helpline and text message service, can be reached at 1-800-247-100. Also www.yourmentalhealth.ie offers a directory of mental health services.