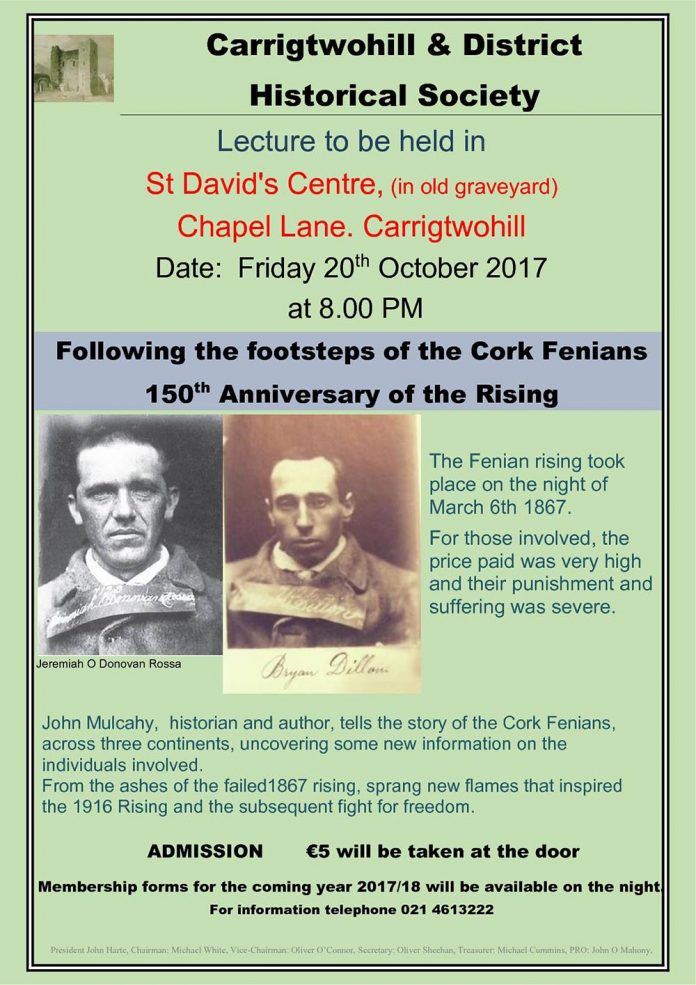 The Carrigtwohill and District Historical Society is holding a lecture on the 1867 Fenian Rising and the Cork Fenians who took part tomorrow, Friday 20 October.
The lecture, titled Following the Footsteps of the Cork Fenians – 150th Anniversary of the Rising, will be held at St David’s Centre (in the old graveyard), Chapel Lane, in Carrigtwohill from 8pm.
Historian and author John Mulcahy will deliver the lecture which will tell the story of Cork Fenians during the events of a rising that spanned three continents, with the talk including new information on the individuals involved.
Admission is €5, which will be returned to the Carrigtwohill and District Historical Society to cover the costs of organising the talk.
The Carrigtwohill and District Historical Society was set up to ensure the local history and folklore of the area is preserved and protected. The society aims to organise around four lectures and two field trips each year.
The Fenian Rising was a failed military rebellion against British rule in Ireland that took place in March of 1867 which was planned by the Fenians, a transatlantic organisation which was originally formed by an alliance of between the Irish Republican Brotherhood and the Fenian Brotherhood. Though the rising itself was unsuccessful, the actions of the people involved in it and the ideals they embodied created a legacy that spread throughout Irish history, influencing the Easter Rising in 1916 and the War of Independence that followed.
Those wishing to sign up to the Carrigtwohill and District Historical Society for the coming 2017/18 year can avail of the membership forms which will be available on the night.