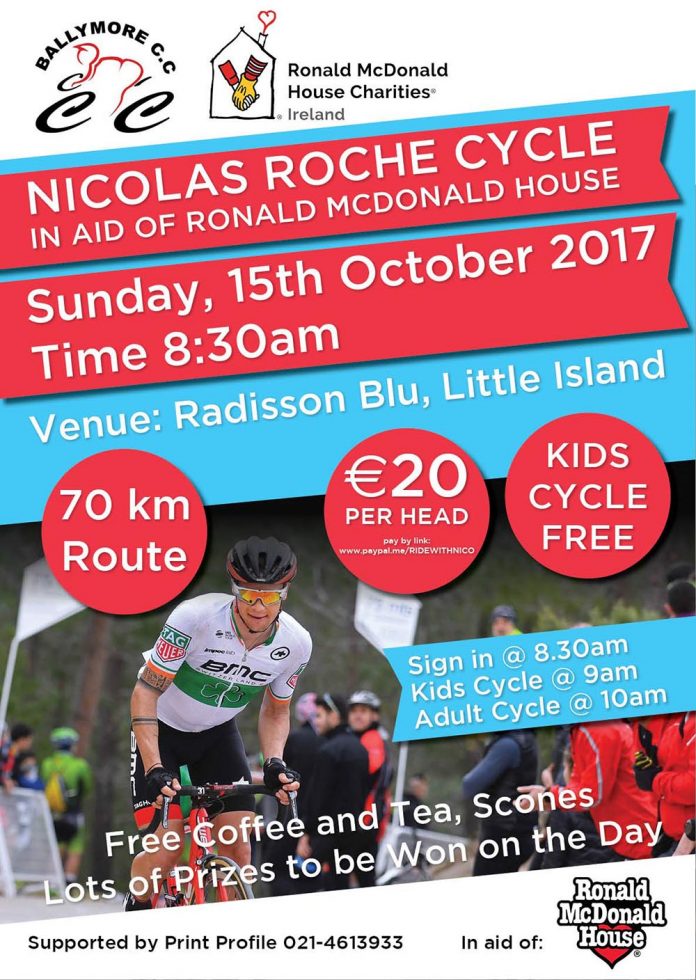 This year’s charity Ride with Nico will tour 80km of East Cork next Sunday, 15 October to fundraise for Ronald McDonald House Charities Ireland.
The event will begin at the Radisson Blu Hotel, Little Island with a kids’ cycle at 9am following registration at 8.30am, with the main sportive cycle departing at 10am. Entry for adults’ 80km cycle is priced at €20, while kids can cycle for free.
Irish professional road bicycle racer Nicholas ‘Nico’ Roche, last year’s Irish National Road Race and TT Champion, will be leading both adults’ and kids’ rides. The route will direct its cyclists through Glanmire, Watergrasshill, Rathcormac, Ballincurrig, Lisgoold, Midleton, Cobh and Passage West before returning to Little Island.
This year’s cycle will raise money for Ronald McDonald House Charities Ireland, a charity which provides accommodation and support for who have seriously ill children in hospital such as Crumlin Children’s Hospital.
This will be followed less than a week later by another sports-themed fundraiser, this time for both Ronald McDonald House Charities Ireland and Children's Medical & Research Foundation Crumlin. Fota Island Resort will host a Celebrity Sports Q and A with a Merchandise Auction from 7pm on Thursday, 19 October
Tickets are priced at €15, with Under-16s entering for free when accompanied by an adult with the proceeds going towards the two aforementioned charities.
The event will include autographs, photos and a questions and answers session with some of Ireland’s most decorated athletes. Said athletes will include: Olympian Derval O’Rourke, cyclist Eddie Dunbar, former Kerry footballer Tomás Ó Sé, Cork City FC manager John Caulfield, former Cork hurler Donal Óg Cusack (emcee), former Cork hurlers Brian Corcoran and Kevin Hennessy, Cobh Ramblers FC manager Stephen Henderson and jockey Davy Russell, among others.
Tickets for the Q and A with the Auction are available from the FOTA Island Resort, all Minogue Furniture outlets, the Village Greengrocer, the Ferry Arms and La Trattoria.
Those who wish to take part in the charity cycle can do so though the events page on Facebook titled Ride with Nico, or register on the morning of the event.

Two Months After Its Sale the LE Aishling is on Sale...

Dangerous Junction At R633 and L3816 Ballymacoda To Be Widened