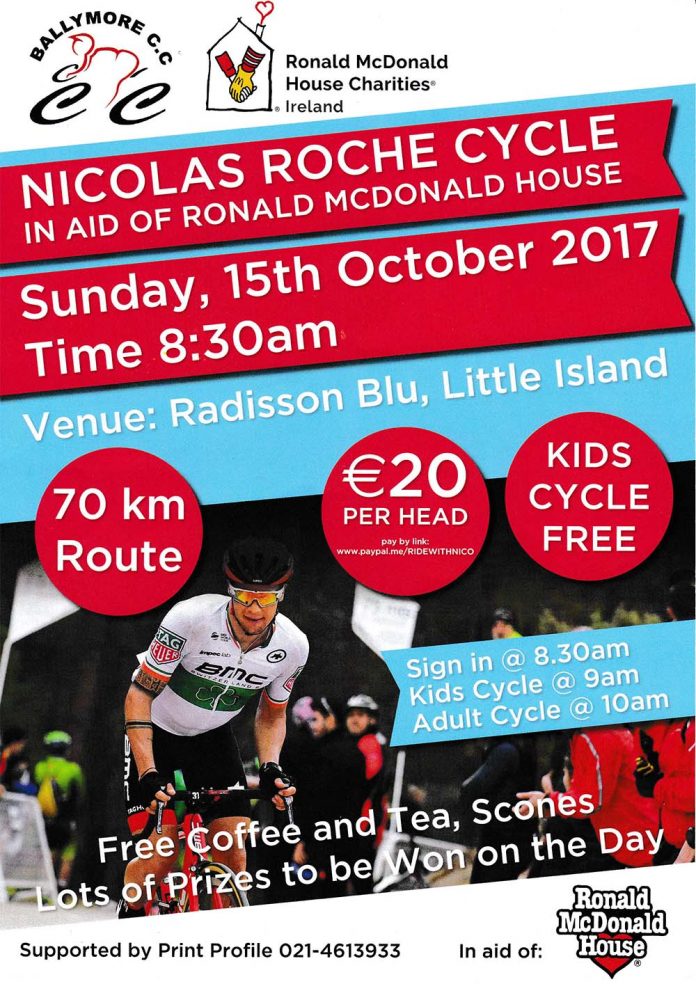 This year’s charity Ride with Nico will tour 80km of East Cork to raise money for Ronald McDonald House Charities Ireland in a little over two weeks, on Sunday, 15 October.
The charity cycle, helmed by Irish professional road bicycle racer Nicholas ‘Nico’ Roche, will begin from the Radisson Blu Hotel, Little Island at 10am, following a kids’ cycle at 9am and the registration at 830am. Entry for adults’ cycle is priced at €20, while kids can cycle for free.
The route, which is approximately 80km in length, will depart from Little Island and take its cyclists through Glanmire, Watergrasshill, Rathcormac, Ballincurrig, Lisgoold, Midleton, Cobh and Passage West before returning to Little Island.
“All the info is on Facebook and people can follow the link there to register,” said John Shanahan, one of the organisers of the event. “People can come along on the day as well. It is open to all cyclists. It is not closed at all; even if you aren’t a member of a club, you can come and take part. There is a free children’s cycle too, and Nico will go out and cycle with them. He’s done very well in the world championship this year. He is still in good condition in the word circle, and it’s great to have him on board.”
Nico Roche, an accomplished cyclist who was last year’s Irish National Road Race and TT Champion, has taken part in similar charity cycles before such as last year’s, which was held in aid of the National Council for the Blind of Ireland (NCBI) and the Irish Guide dogs for the Blind.
This year’s cycle will raise money for Ronald McDonald House Charities Ireland, a charity which provides accommodation and support for who have seriously ill children in hospital such as Crumlin Children’s Hospital.
“To be honest, this charity was chosen as a friend of mine who is involved in cycling, he’s son is up and down to Crumlin all the time,” said Mr Shanahan, a member of Midleton Cycling and Triathlon Club. “He said the House has been incredibly good to him and his family. I found out a little about the charity and they are really, really struggling for funds there. Crumlin and the House are two separate charities. So we decided that the cyclists will get behind it this year and see if we can raise funds for it.”
Mr Shanahan, who was diagnosed with blindness more than ten years ago and gets by with around 2% vision, will cycle the route on a tandem bike. His pilot may be either Nico Roche, or Mr Shanahan’s long-time friend and pilot Gary Naff.
Those who wish to take part in the charity cycle, which is organised through Ballymore Cycling Club, can do so though the events page on Facebook titled Ride with Nico, or register on the morning of the event.