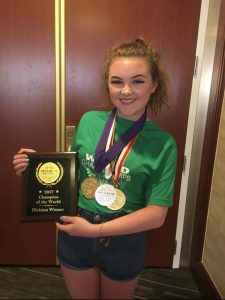 Sarah Gilroy, a musical theatre student from Cloyne, returned from the United States last week with three medals and plaque in hand after her performance at the World Championships of Performing Arts (WCOPA) from 30 June to 9 July.
Ms Gilroy, the only contestant from Cork who travelled to California to represent Ireland at WCOPA, competed in three categories in the Musical Theatre division, winning gold in the Open Category and finishing as its overall champion of the Open Category, for her performance Live Out Loud from A Little Princess.
She was also awarded a silver medal in the 18-24 Broadway category, where she sang Part of Your World from The Little Mermaid, and finished as a Finalist in the World Category, in which she sang Red is the Rose.
“Sarah was overwhelmed by all the different countries that she competed against,” said Catherine Gilroy, Sarah’s mother. “She had very busy few days after she got through the first round. She had two long days of rehearsals for the final of the overall category. She was the only European left in the senior Soloist category. She has made amazing friends from all over the world and has had the opportunity to meet a lot of agents in the industry and hopefully she can build on this in the next few months. She' will have to see what the future holds.”
Ms Gilroy this year just finished her first year studying towards a Bachelor of Fine Arts in Musical Theatre at American College Dublin, having previously attained a diploma in Musical Theatre with Dublin Institute of Technology and has performed and continues to perform at a variety of roles at venues in Cork and Dublin.
The 21st Annual International Performing Arts Championships saw musicians, singers, dancers, actors, and models from over 50 countries across the U.S., Canada, Caribbean, Central and South America, Europe, Asia and South Africa performed before 75 judges in what has been nicknamed the Talent Olympics.