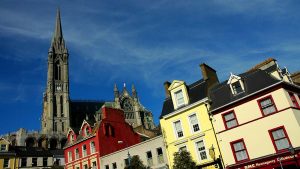 Over 150 year old Rinn Ronan hotel in Cobh has been demolished, leading to grief and outrage among heritage lovers.
The popular venue was demolished as developers prepare to build four two storey houses in its place.
Once the home of Joseph Philip Ronayne a civic engineer, noted for his development of the Irish Rail network, it became one of East Cork’s most famous hotels.
The property once welcomed international dancers, theatrical, TV and Radio stars through its doors and was at one stage a recording studio for folk pop group the Kelly Family.
In 2015 planning permission was granted to demolish the iconic property and construct the accommodation on site.
Earlier this week Rinn Ronan’s consignment to history sparked outrage locally as many took to social media to vent their anger.
Many had expected the building to have been included on the list of preserved buildings and expressed alarm that a number of Cobh’s historic sites were being lost.
Belinda Shaw of the newly formed Great Island Historic Preservation Group said it was “alarming” that demolition took place.
The group was established following plans to develop the town’s heart break pier, the site of departure for many who boarded the Titanic in 1912.
Ms Shaw said the harbour town was unnecessarily losing historic buildings which any other town would give priority to preserve.
“All of this only came to light because of the [Titanic] pier that there is nothing being done, no one is watching these things. We have to look after our past it’s what made us”
The group will hold a public meeting in the Sirius Centre next month with a view in creating a map of historic buildings on the great island and establish a watchdog to prevent further loss of the areas heritage assets.
The closure of Rinn Ronan in the early 2000’s saw the end of the hotels lengthy history in which time it was a popular dance venue.

Glanmire in the Hunt for Five-in-a-Row

Giving Back to the Community is a Goal for Midleton Lions...

Tidy Towns to hold Public Meeting this Friday at My Place,...