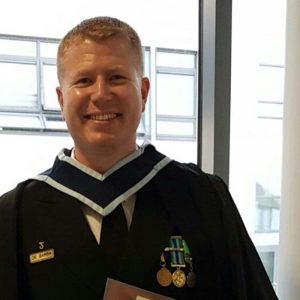 Irish Naval Officer Ruairí De Bara’s written work has been recognised by a nomination for the European Military Press Association Media Awards.
The Chief Petty Officer has been shortlisted for his insightful commentary on continuing unrest in Somalia and how a former member of the Irish Defence forces is working to rebuild a divided nation.
De Bara was announced as one of 12 authors and military journalists for the European Award.
The 2017 short list also features writers from Croatia, Estonia and Germany,
The Cobh man appears alongside 6 other Irish nominees including renowned Military Historian Paul O’Brien, himself a former winner of the award.
This is De Bara’s first time being nominated for a prestigious award for his writing.
“Chuffed is an understatement. I’m delighted to be on the same webpage as some fantastic military authors like Paul O’Brien from Kilmainham Gaol” Ruairí tells the East Cork Journal.
Award recipients will be announced in September with the award ceremony taking place a month later in Budapest Hungary.
'Rebuilding Somalia - The Sea is their future.' appeared in the May publication of An Cosantoir and follows on from Somali in Strife a piece by Paul O’Brien MA in the same publication in February.
De Bara’s piece features an interview with Chris Reynolds director of the Irish Coast Guard on secondment to EUCAP as head of operations.
EUCAP is an EU led mission to support Africa in its political and security challenges.
In his piece CPO De Bara states that the EU led mission is at a critical junction, with the operations mandate extended until 31 December 2018.
The senior officer argues the Somali people need further support stating they now have a footing to rebuild their fragmented nation.
Failure to maintain a presence would be a retrograde step he says which could lead to renewed threats to international shipping by Somali pirates.
In March Somali buccaneers hijacked their first commercial ship in five years. The Aris 13, an oil tanker was boarded by 24 armed men as it sailed close to Somalia’s northern coast.
EU anti-piracy patrols have had the situation under control in the region for some time.
The attack the first since 2012, will raise fears that scaling down of anti-piracy patrols has encouraged the pirates’ into action again De Bara tells the East Cork Journal.
Located in the Horn of Africa, Somalia is bordered by Ethiopia to the west, Djibouti to the northwest, the Gulf of Aden to the north, the Indian Ocean to the east, and Kenya to the southwest. Somalia has the longest coastline on Africa's mainland.
Created in 1960 from a former British protectorate and an Italian colony, Somalia collapsed into anarchy in the early 1990’s following the overthrow of the military regime led by Siad Barre.
Various armed factions began competing for influence in the power vacuum, an internationally backed unity government formed in 2000 struggled to establish control, and the two relatively peaceful northern regions of Somaliland and Puntland broke away.
The seizure of the Capital Mogadishu and much of the southern region by an alliance of Islamist Sharia Courts in 2006 provoked an intercession by its neighbour Ethiopia and African Union forces.
Since 2012 a new internationally backed government has been in place, however it faces challenges from Al Qaeda aligned Al Shabab insurgents.

Take money from greyhound racing and give it to animal welfare...