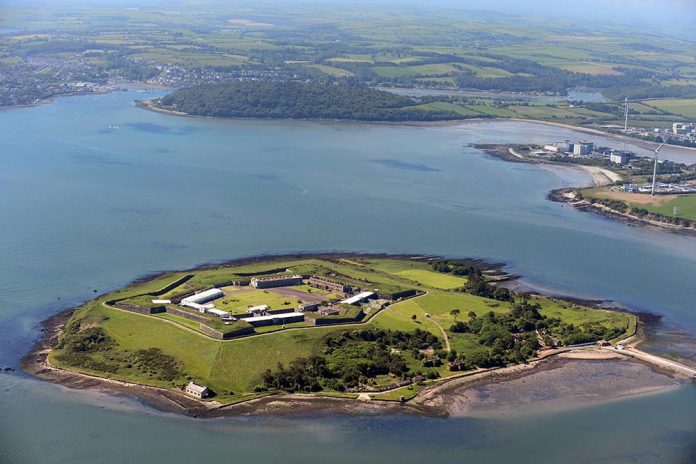 Cobh Municipality are to push for further funding from Bord Failte to advance development of Spike Island, after it was voted Europe’s top tourist destination last week.
The Island fortress beat off Buckingham Palace, the Eiffel tower and the coliseum to be crowned Europe’s top destination for 2017, at the World Travel Awards held in St. Petersburg, Russia.
Statutory business was suspended for a time at the October sitting of the borough to recognise the Island’s achievement and seek the support of Cllrs, to pursue additional funding, to upgrade facilities at the world class destination.
Phase two of the redevelopment of the Island was hamstrung when the local authority were turned down for grant aid of €7million by the tourist body.
The fund was being sought to provide further exhibition areas a visitor interpretive centre and tourist train connecting the pier to the fort.
Municipality Chairman Padraig O’Sullivan said given the island is now of international importance the Authority need to make it quite clear that, whatever funding comes available that Cobh would be considered for the full completion of the project.
Cork County Council have invested over €6million in upgrading facilities on the island which was part funded by Failte Ireland before opening it as a tourist attraction.
Labour Cllr Cathal Rasmussen who backed the call said headlines in national media last week that Ireland’s Alcatraz had been snubbed by Failte Ireland were “disappointing.”
He said “I appreciate there was an issue with funding going back a couple of years, but it hasn’t stopped the progress of the island.”
Over 45,000 visitors have been welcomed to Spike Island so far this year, with a target of 100,000 visitors by 2020.
As tourist numbers soar the Port of Cork are believed to have entered negotiations with Cork County Council to provide a sea bus to open up other accesses routes onto the island.
It’s understood a new multipurpose berth will be created at Lynch’s Quay where the new service is to be based.
Independent Cllr Kieran McCarthy welcomed the plans. The Cobh based Cllr said “while the sea busses are welcome, hopefully if that follows we won’t see a bridge going from Haulbowline to Spike.”
He said “Tourist trade in Cobh are dreading that day because it will cut off all contact with Cobh. It’s vital because the more people that go to Spike, have to go to Cobh first. People in Cobh will get some of that market if the link remains.”
Fortress Spike Island will now represent Europe at the Grand World Final of the World Tourist Awards in Phu Quoc, Vietnam on 10 December.
The public are encouraged to vote to make Spike the top go to destination in the world by visiting www.spikeislandcork.ie and clicking the link to cast their vote.

Midleton Educate Together All Set for New Year’s Swim