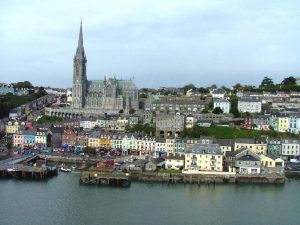 Cobh Peoples Regatta, one of Europe’s Oldest Regattas is bigger and better than ever this year, it was considered to be Europe’s Premier Sailing Event, with top racing boats from Ireland and further afield taking part. Now more than one hundred years later the event which is one of Irelands oldest has turned into a spectacular Free Family Fun Three Day Festival.
On Regatta weekend the streets are even brighter with flags and bunting and the sea will come alive with multi coloured Sails of Racing Yachts, the sound of straining oarsmen and the majesty of the visiting Cruse Liners.
The Regatta opens this year on Friday 11th August at 7-00pm , followed by a Dance Spectacular Preformed by Local Children, and Sinead Shepard's School of Dance and some Irish Dancing as well, And later the Regatta Queens arrive on Stage for an interview with Dr Michael Martin, and the evening continues till late with the Festival Club in the Commodore Hotel with Night Club C .
Sailing is always part of any Regatta and of course is no exception with a history of Sailing for nearly Three Hundred years, as the home of the Royal Cork Yacht Club during its hey day in the latter part of the century.
Ashore the entertainment will continue on Saturday with a Free Family Fun afternoon for the kids to include
children’s Fancy Dress, Mini Queen, Pretty Princess, Mini King, and Handsome Prince competitions, and Face painting ,and Market stalls in the Promenade , followed by Dinghy Sailing and Rowing. Saturday Live Open Air Concert in Casement Square with the Band Road Kill Revival featuring Jamie Stanton.

The evening continues with a Cobh Fisherman’s Trawler Race, and the eagerly anticipated Crowning of our
Regatta Queen, an Open Air Concert with the Service playing live in Casement Square , Followed by the Grand Finale The Magnificent Fire Works Display ,.and closing the event our Festival Club in the Commodore Hotel with Club C and the Road Kill Revival featuring Jamie Stanton playing live in the Jack Doyle Room.
The full Regatta Programme is available in Cobh Shops.
For further Details Log on to www.cobhpeoplesregatta.com
email cobhpeoplesregatta@mail.com
Twitter @cobhregatta

Take money from greyhound racing and give it to animal welfare...