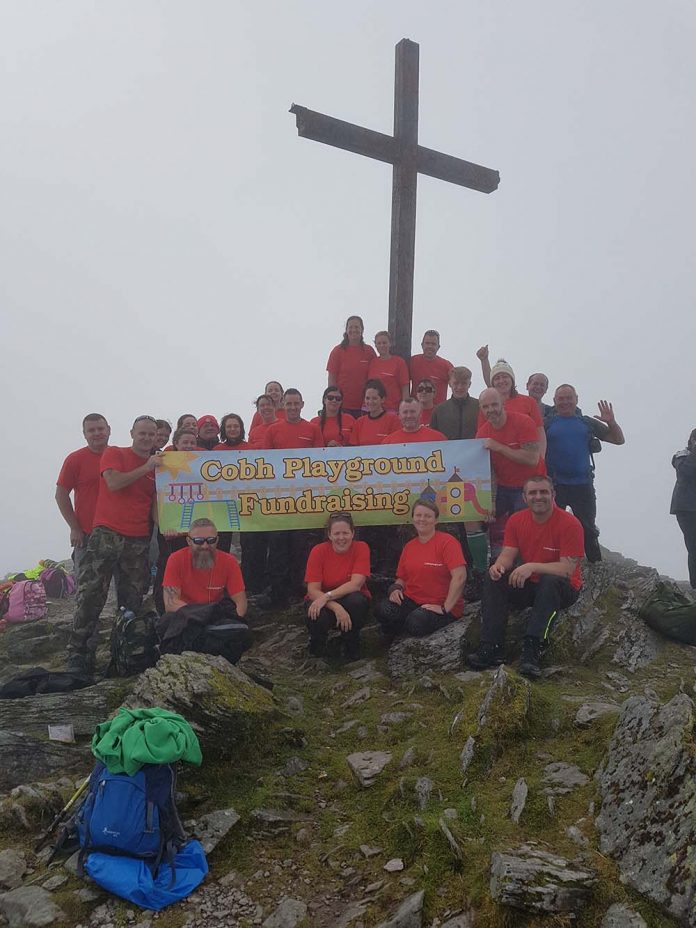 The Carrauntoohil climb fundraiser was a huge success for Cobh Playground Fundraising this past Sunday, 3 September, raising an estimated €3,000.
Twenty-seven people travelled to the Macgillycuddy's Reeks in County Kerry to climb Ireland’s highest peak to raise funds for Cobh Playground fundraising. Each person who took part had previously raised at least €100 towards the group, with many raising beyond that minimum requirement.
“It was the hardest thing I’ve ever done in my life,” said Dwayne Breen, Vice Chairman of Cobh Playground Fundraising. “Twenty-seven people did it. It was eight hours to go up and come down. We went up the Devil’s Ladder and down the Zig-Zag route. I never did anything like that in my life.”
The day before the climb, Saturday 2 September, Cobh Ramblers Football Club hosted a football match to raise money for Cobh Playground Fundraising. Held at St Coleman’s Park, two teams comprised of ex-Springfield Ramblers played in the Reunion Match fundraiser.
“The match was all ex-Springfield players,” said Mr Breen. “It is an annual charity match we do, and it was very good. It finished 3-1 in the end. We just got all the lads together for a run out and they all threw in a tenner each. We had 20 odd players there and raised €200.”
Before last weekend the group’s total stood at €162,587 and the group expect to enter the formal tendering process next month.
“I don’t yet have the exact figure as sponsorship cards are yet to come back,” said Mr Breen, “but I’d say we raised over €3,000 with the climb. They would bring the figure up to approximately €166,000 and will hopefully get us over the finish line as it might be the last fundraiser we have for a while as we are going to tender in two weeks’ time. After all, we have exhausted all options for fundraisers, from climbing mountains to jumping out of aeroplanes to the Full Monty. We would like to say thanks to all those who supported both events over the weekend.”
Currently Cobh Playground Fundraising is proceeding with its application to move from a non-profit organisation to a fully-fledged charitable body. Cobh Playground Fundraising was established in July 2015 to supplant the under-equipped playgrounds at the Five Foot Way and the Promenade with an all-inclusive playground suitable for all children in the town, including those special needs or those who are differently-abled.

Claycastle and Front Strand Youghal may soon be Accessible for all...

May Fayre in Aid of Time for Tilara Commences This Sunday