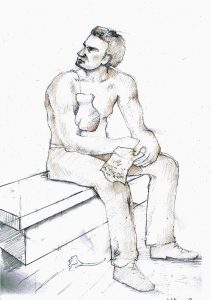 A new statue estimated to cost €50,000 is being planned for Cobh town centre.
The eye catching 5 foot structure will honour the town’s famous son, Jack Doyle.
Known as the Gorgeous Gale it will be situated on the southeast corner of Pearse Square, close to the BMC store.
The Sculpture will represent Jack in a seated position, on a bench, with one arm outstretched along a railing.
Born on the 13 August 1913 into a working class family Jack Doyle, at one time, was a contender for the British Boxing Championship, a Hollywood actor and a Tenor.
If given the go ahead, it is envisaged the piece will encourage visitors from far and wide to sit and contemplate and explore the town’s rich heritage, boosting tourism in the process.
The idea is the brainchild of the Colin Barry whose family were involved in returning Jack's remains to Cobh after he died in 1978, and Chris Doyle Jack's nephew (living in UK).
Currently there are two plaques in Cobh to its famous son, one on the promenade and the second located close to his place of birth, the Holy Ground.
The artist commissioned for the task is Mick Wilkins, a Cork sculptor based at the National Sculpture Factory in Cork.
Residents and interested parties will be asked for their views next month, when a formal 8 week public consultation period will begin.
If planning is granted for the structure the Cobh Municipality intend to provide €8,000 towards the cost, with the remaining to be raised by donations from the local and business community.
Independent Cllr Diarmaid O’Cadhla, who is supporting the project, said “It is expected that the statue will be iconic, and a 'must-do' for visitors to have their photograph taken with 'The Gorgeous Gael' - Jack Doyle in Cobh - much like in Copenhagen where going to see the Mermaid is a must-do for visitors there.”
If planning is granted the street art could be in place by December.

Pride of Place Judges to Visit Carrigtwohill This Coming Tuesday