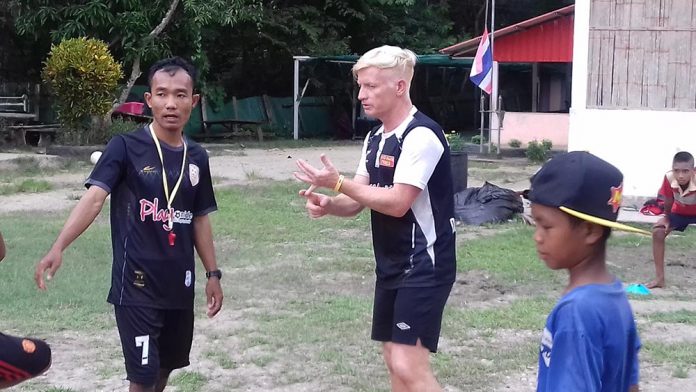 A Cobh native has launched a soccer and education equipment drive to help underprivileged children abroad.
The equipment drive aims to collect both soccer and educational equipment, with fundraisers planned to cover the transportation costs of the equipment to places such as Thailand and Ghana.
Stephen Neiland, the current manager and head coach of multiple soccer teams at Cork Institute of Technology, launched the equipment drive following his volunteer work abroad in Thailand this past summer.
Donations of both soccer and education equipment would be gratefully accepted. All items should be in a reusable condition, if not new.
The list of soccer items available for donation include football boots, running shoes/sneakers, soccer balls, sports bags, shin guards, jerseys, shorts, kits, general sportswear and active wear and general fitness equipment.
School equipment eligible for donation includes school bags, books, pencils, crayons, colouring books, etc.
Local clubs such as Carrigtwohill United AFC, which is accepting donations of the above items at its clubhouse in Ballyadam, and League of Ireland clubs like Cork City FC and Cobh Ramblers FC have pledged their support to Mr Neiland’s equipment drive.
Once the items for the equipment drive have all been collected, they will need to be sent abroad. A table quiz fundraiser to help cover the costs of deliver the education and soccer equipment takes place this at 8pm Friday, 13 October, at the Beer Garden, Turners Cross in Cork City. Entry to the quiz is priced at €5 per person.
The volunteer work Mr Neiland is involved in began 15 months ago and aims to develop teaching and coach education in the area through developing facilities at underprivileged schools and running football coaching camps in the area. Steven journeyed to Mae Sot, Thailand this past summer at his own expense to help coach and teach children near the Thai-Burma border, which is home to a substation population of Burmese migrants refugees.
“There was fighting there not long ago and families were forced out of their homes,” said Mr Neiland. “They can’t come back due to uncertainty and are displaced to refugee camps. There were families scavenging out of dumps, people struggling to support their families. It is very distressing. The project teaches life skills to the kids as well as coaching football. It is trying to bring a little of that happiness back to the kids.”
Mr Neiland’s involvement in the volunteer work, which is run by PlayOnside, in partnership with International Football Education, stems from his nephew Phil’s role in the latter organisation.
The experience Mr Neiland, a qualified UEFA A Licence Holder with a UEFA A Coaching Diploma who previously held coaching and managerial roles with Cork City and Cobh Ramblers Football Clubs, can offer to the project is invaluable.
“With this programme there were kids from different schools and ethnic backgrounds and religion playing football together and having fun,” said Mr Neiland. “It was bringing down those barriers. We want to use football as the tool to reconnect and develop. It is a happy programme and the kids were happy to be in it. It was hard work, but I enjoyed it tremendously and wouldn’t change it for the world. What we did in such a short space of time made a difference out there. I’m looking forward to going back there. With the skills I have, I can do more. We want to go back and help set up an academy type structure so the kids can play football, and an educational structure.”

Top Event ‘Pops Up’ in Youghal during August Bank Holiday

Talented Students from Dungourney and Midleton Celebrate Graduation from CSN

Tidy Towns to hold Public Meeting this Friday at My Place,...

Cloyne Music Festival in Aid of Round Tower Restoration Begins This...

O’Keeffe welcomes introduction of Bill that will benefit childcare providers and...