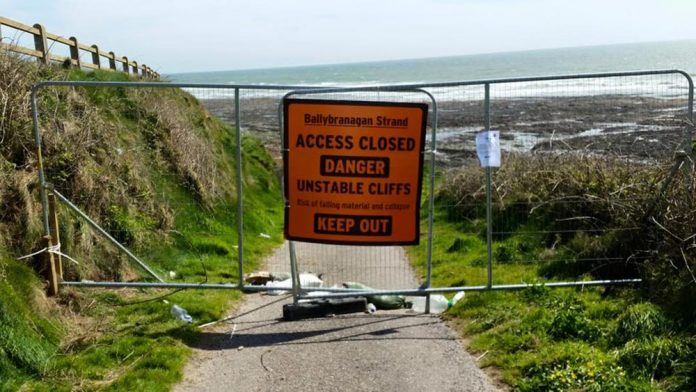 Cork County Council estimates work to address the erosion at Ballybrannigan strand will commence this autumn and should be complete by June.
The local authority have lodged tender documents to have remedial work carried out to the Council owned car park, slip way, and the strengthening of the cliff face directly below the car park.
In the plan there is also a proposal to create a red zone of 10 metres from the cliff face, along the entire stretch of beach warning of unstable cliffs.
The popular East Cork beach was closed as a result of damage and erosion during the Easter Storm of April 2016.
Extensive damage was caused to Ballybrannigan beach car park, the public access slip, and to the cliff face.

The sandy beach has been the centrepiece for thousands of people’s childhood in East Cork.
The closure sparked an outcry from the public and also garnered tremendous support through social media.
Ballybrannigan has been used by a number of organisations, individuals and is popular with dog walkers.
East Cork Municipality Councillors Susan McCarthy and Michael Hegarty have made repeated calls to have the amenity reopened which they say is a major loss to the area.
Both Cllrs this week welcomed the news of the impending works.
Cllr Hegarty told Monday’s sitting of Cork County Councils Southern Division “we said all we needed really was signage just to get the beach open, and it has taken two reports and two years to finally come to the conclusion signage is needed.”
Cllr Susan McCarthy agreed with her fellow Fine Gael colleague “at the time we said signage would be sufficient in the absence of anything else being done. We spent €11,750 on the report basically telling us exactly that.”
A senior council official responded by stating “it’s more than signage, repairs are required to the slip way, rock armour under the earthen cliff that has given way and then signage.”
They added the works also involve the relocation of an entrance for a farmer adjacent to the car park, “if it was just signage it could have been open two years ago.” Commented the senior executive.

Silver Chalice and Paten Returned to Spike Island After 136 Years

SECAD Partnership Hosts Jobs Fair with over 75 Roles to Fill