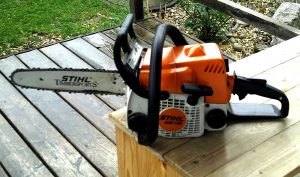 Fundamental questions need to be asked concerning Cork County Council’s decision to retain the services of professional tree surgeons, Cobh Municipality Cllrs have claimed.
The borough is to refer the practice of using tree surgeons on fallen trees, to its Roads and transport strategic policy committee for review.
The move comes following the tabling of a motion by Independent Cllr Ger Keohane at the October sitting of the Cobh and Glanmire Municipal district.
Cllr Keohane told the executive “if a tree falls across to a public road, the staff can only block the road, they can’t use chainsaws.”
He said training outdoor staff in the correct use of chainsaws, would save the authority money in the long run, while opening access in a matter of hours rather than wait up to 4 hours for a surgeon to arrive.
The independent Cllr added ground staff in other local authorities are tasked with using chainsaws in their daily routine and that it should be the same for Cork County Council staff.
“Cork City Hall do it, as do Kerry, Limerick and Waterford Councils” commented Cllr Keohane.
Fine Gael Cllr Anthony Barry who regularly uses a chainsaw agreed, he said its “health and safety gone daft.”
“There are situations arising where trees and limbs are falling down on roads and we have to get tree surgeons in to it, when our people should be able to go out and cut it and take it away.”
The matter has already been discussed at the authority’s safety measures development committee who have decided the current system will remain in place.
A senior council official told the Cllrs a frame work has been set up of approved tree surgeons who can respond to an emergency and has been recently signed off on.
They said the reason behind the decision was the direct result of a court case taken against the Council.
In 2016 the local authority was ordered to pay out €50,000 for a health and safety offence following an investigation into the death of a workman during a tree felling in 2012.
Now Cobh municipality want the policy reversed claiming it’s a case of “health and safety gone daft.”
The decision will now be debated at the Council’s special purposes committee on roads and transport.

Mental Health Issues Are On The Increase Among Catholic Priests

Scoil Bhride is Rated Best In The County 3 Years In...