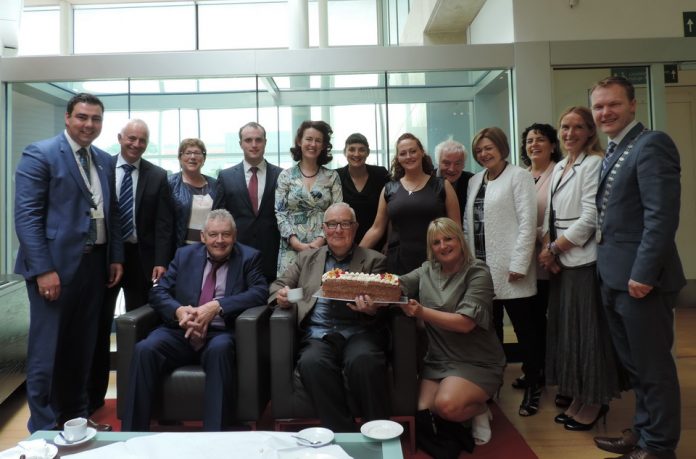 The hard work and commitment of Councillor Noel Collins was recognised this week when he was presented with a long service award by County Mayor Seamus McGrath.
He has no phone, no computer just a type writer and written letter for communication yet he has topped the poll in every election since 1967.
Affectionately known as the father of Cork County Council, Cllr Collins celebrated 50 years of unbroken service as a public representative at the June sitting of Cork County Council on Monday 12 June.
The Midleton based Cllr is the longest sitting councillor since the authority’s establishment 118 years ago.
County Mayor Seamus McGrath said the Council wished to recognise Cllr Collins exceptional contribution over five decades to the community of East Cork and beyond.
“To serve as a public representative for 50 years is not an easy task. It is difficult and a demanding role, whether it’s at Town Council level or Cork County Council, but to do it for 50 years is outstanding.”
Often outspoken he is a leading proponent of justice through service, fighting for the rights of the vulnerable in society.
Long-time friend Fine Gael Cllr Michael Hegarty said “he’s an exceptional character” and described him as “a social worker in a public representative role.”
Representatives from both sides of the chamber said Cllr Collins approach to social justice has been an inspiration to all.
The independent Cllr is a champion for the homeless and the marginalised in society.
Born in Lusk County Dublin he was educated by the Cistercian Monks in Mount Melleray Co Waterford and later became a social worker.
In 1967 he was elected to Midleton Town Council for Fine Gael but left the party two years later when he failed to get a nomination for the 1969 general election.
Over the past 50 years Cllr Collins has witnessed many changes politically. He has admitted that some have not been positive. He has continually opposed the 2014 local government reforms which saw the abolition of the country’s 80 town councils.
An emotional Cllr Collins said he felt honoured by the council’s recognition of his tenure.
“It’s most unexpected, somewhat embarrassing and deeply humbling. I’m noted as the pest from Midleton but it’s not intentional.”
Fianna Fail Cllr Bob Ryan said “what makes him stand out is that he looks after the vulnerable without fear or favour. I often wonder and believe he would make a great bishop. He knows every priest in every corner of the county and knows where they are going. He would expound great social justice as a bishop.”
East Cork Municipality Chairwoman Mary Linehan Foley said it has been a pleasure and continues to be a pleasure to work alongside Cllr Collins.
She said “Everybody in East Cork knows you. You are great with the advice and words of wisdom. It will continue to be a pleasure to work with you.”
Cllr Sinead Sheppard paid tribute to his unorthodox approach to holding clinics.
She said “I was driving towards Lidl and Aldi and there hiked up on a wall was Noel and a few people around him. I said my God there’s his clinic and it works.”
Council CEO Tim Lucey said Cllr Collins service was a phenomenal commitment to the community.
“Cork County Council is in existence for 118 years and you have spent 50 years of those working for the community whether through Town Council or County Council. That’s 42% of the entirety of the time of the organisation.”
Mr Lucey said he expected to return in 18 years to mark Cllr Collins 68th year in public life reflecting 50% of the existence of the County Council.