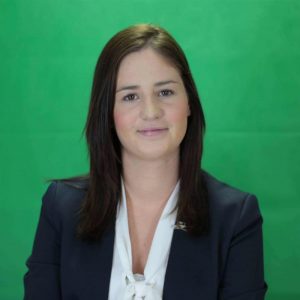 Cork County Council is to consider partnering with other local authorities to develop a data centre in order to meet their requirements under new Data Protection Legislation.
The move comes following the tabling of a motion by Sinn Féin Councillor Danielle Twomey at the March sitting of the East Cork Municipality.
The Midleton based Cllr who received the full backing of fellow Cllr’s had questioned the effectiveness of the impending CCTV system for the market town, once new EU data regulations come into play later this year.
From the 25 May new EU Data Protection Laws will change the way we capture and handle CCTV footage, meaning evidence from county run CCTV systems could be challenged in court, if the local authority does not comply.
Cllr Twomey told the executive on Monday “at a recent Joint Policing Committee, Gardaí stated they do not want the sole responsibility of being the Data Controller and Data Processor.”
She said if the impasse cannot be resolved the state of the art surveillance system will have been “a fruitless endeavour.”
The Sinn Féin Cllr said by partnering with other local authorities in developing a data centre they would be limiting the cost to the tax payer while increasing the effectiveness of the scheme.
“We could use it for not only for criminal activity like the Gardaí. We could use it for littering, for dog fouling, because it would be an independent body would be the data controller.”
Limerick City and County Council have employed an Independent company to operate a monitoring station. Since its establishment in 1997 it has helped to reduce levels of anti-social behaviour in areas like Moyross.
In 2015 the 24 hour system was extended to the areas in the south of the city.
The cost of the Moyross Data centre was €2.7million with an annual running costs of up to €600,000.
The Limerick project is currently funded by Limerick City and County council with the remainder picked up by the Department of Social Protection.
Civil works are currently being completed on the Midleton scheme and will be the most advanced and modern CCTV system of its kind.
The €100,000 scheme, monitoring Midleton town centre and its environs will link 26 cameras to Midleton Garda station when fully operational.
The increased security measures include an automatic number plate recognition data base.
This means, for example, that a vehicle registered as stolen or a vehicle with fake number plates could in future be picked up as it enters or leaves Midleton.
Senior Gardaí say similar systems in other locations have contributed to a reduction in crime.
The new system will be an invaluable aid to the police with their investigations and also stop criminals from committing offences and breaking the law.
The new General Data Protection Regulation, will require local authorities to employ a data controller as Gardaí who use the information from the CCTV systems can no longer be the keeper of DATA.
Meaning any video evidence presented in court could be struck out unless County owned schemes are compliant.
Recently Cork County Council stated they were currently assessing the impact of the GDPR regulations across the full range of council services. With respect to CCTV, the impact of GDPR has yet to be assessed. This will be examined in due course.”

Ballinrostig Vintage Club to Hand Over Almost €7,000 to Charity at...