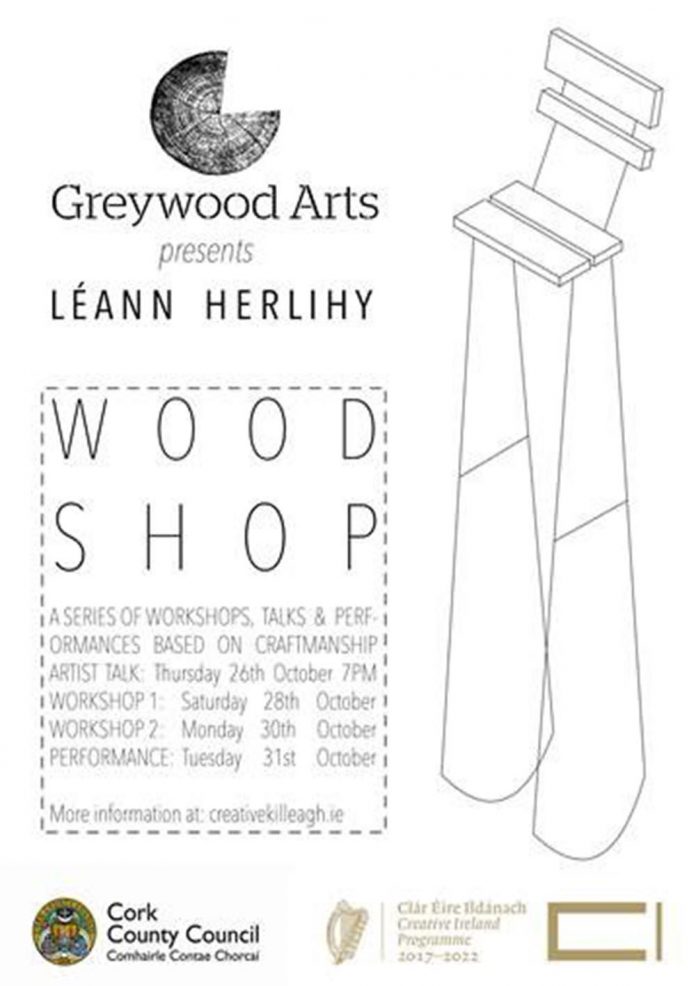 Creative Killeagh launches with a performance event at Greywood Arts, Killeagh this Halloween, Tuesday 31 October.
The Woodshop Performance and Creative Killeagh Launch will be a layered event building from two previous workshop events while simultaneously launching Creative Killeagh, a continuous series of art-based events which will run through to May, 2018.
The first of two woodworking workshops designed around constructing a rocking chair will be held from 2-5pm on Saturday, 28 October with the second following on Monday, 30 October from 10am-1pm
These workshops will outline the basics on building a rocking chair while encouraging creativity. The events will be supervised with safety equipment provided. The main joining method will be similar to a jigsaw puzzle, which each puzzle piece offering multiple possibilities to create different and abstract forms of rocking chairs, which will then be exhibited at the Creative Killeagh Programme Launch on Halloween with credit to their carpenters. Construction is child-friendly, but children must be accompanied by an adult.
The Creative Killeagh Launch will include an interactive performance by Léann Herlihy, the current artist-in-residence at Greywood Arts, in which she will explore the ritual of rocking, incorporating the rocking chairs made during the workshops prior to the performance. The event will also include traditional Halloween festivities, with campfires and treats and is suitable for the whole family.
Ms Herlihy, a prolific performance artist, will also lead a conversation around her artistic practice during a prior event held on Thursday, 26 October from 7pm, during which she will detail her thought process, concepts and motives that fuel her works. The event will also include a screening of David Shaw-Smith’s documentary HANDS, which captures traditional rural and urban life in Ireland during the seventies and eighties.
Creative Killeagh is a series of arts workshops, performances, and events for the Killeagh-Inch community leading up to May Sunday 2018. The program includes two Artist-in-the-Community Residencies at Greywood Arts, an East Cork guesthouse for artists where they can stay in self-catering accommodation with access to workspace. Creative Killeagh also includes a large-scale community project developed in collaboration with local groups.

Cobh Tourism Rallies together Tourism Stakeholders and Community to Develop ...