On Sunday last Cork hurlers travelled to Pearse Stadium in Galway needing a win to keep their League qualification hopes alive, with opponents Galway in a similar situation. Kieran Kingston again decided to shuffle his pack but to this observer it looked more like musical chairs as while very few of the starting fifteen were replaced, almost all were in different positions. Not a bad thing if it works but so many changes does not in-still confidence I would think.

Anthony Nash returned in goal with Niall O’Leary also back in the team, while Robert Downey who was picked at centre back but replaced by Tom O’Mahony before the start, while Daragh Fitzgibbon teams up with Mark Coleman at midfield with Bill Cooper selected at wing-back. No new faces in the attack that includes five experienced campaigners with just Robbie O’Flynn in his first real campaign.

Ultimately it turned into a satisfying win that was much more about character than class for Galway. Shane O’Neill’s outfit fell behind in the 50th minute and with Cork backed by the elements in the second period the locals were under real pressure. That, though, was when Galway started to answer the questions being posed by Cork with Gearoid McInerney and Shane Cooney two defiant figures for the maroon and white county.

Robbie O’ Flynn’s 52nd minute dismissal for a foul on Fintan Burke did not help Cork’s cause and Galway exploited the numerical superiority with the issue delicately poised. In the closing stages Galway outscored Cork by 1-5 to 0-2 with Brian Concannon’s delightful 55th minute goal proving to be the critical moment.

Despite playing into the teeth of a strong first half wind, Cork were content to only depart trailing by 1-10 to 0-10 at the interval with Cork hitting a perfect ten, registering ten points from ten attempts against the breeze, to leave them in a strong position at half time.

I contrast Galway had plenty of opportunities initially, but the fact that only 1-10 was struck from 20 shots ensured Cork were in a decent position at the turnaround considering the elements. With Patrick Horgan sharp from frees the teams were deadlocked at 0-4 each by the 17th minute before Galway enjoyed a productive burst.

Aidan Harte, Conor Cooney (free), and Adrian Tuohy nailed points prior to Jason Flynn’s sweet 23rd minute major. Cathal Mannion, Cooney, and Brian Concannon were all involved in the build up with Flynn eventually rattling the Cork net. Cork, though, stayed composed reeling off six of the last nine points before the break with Conor Lehane and Bill Cooper landing splendid efforts for the rebel county.

When the action recommenced Cork continued to narrow the deficit and hit the front in the 50th minute as Tim O’Mahony netted. Robbie O’ Flynn’s red card followed shortly after and Galway subsequently pounced for a goal with Conor Cooney’s inviting delivery gathered by Brian Concannon, who mined a goal that started the Galway recovery. From then until the finish Cork could only muster a couple of Horgan frees, while Galway finished smartly. Substitute Evan Niland rifled over two frees and the returning David Burke sealed the deal with a trademark injury time point which was saluted by a throaty western roar. Galway gleaned the spoils and put an end to Cork’s 2020 league campaign. 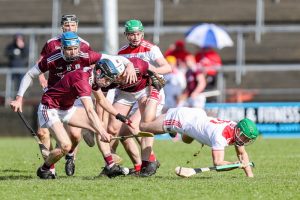 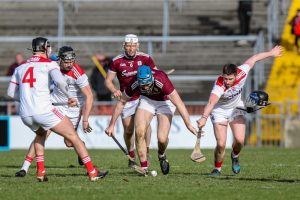