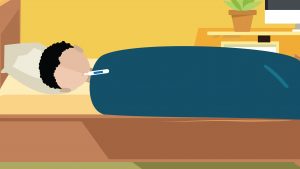 Warnings have been issued to the parents of students attending St Colman’s Community College in Midleton, as one student has been confirmed with Mumps.
The Health Protection Surveillance Centre (HSPC), the Agency responsible for the surveillance of communicable disease, has confirmed that the National outbreak which began in 2018 is still ongoing.
The second level school, through its online portal, has provided parents with information about mumps.
In a text message pointing parents to the Colman’s website, they said ‘we have had a case of mumps in the school. This is a notifiable illness and something of which you should be aware, and to look for in your son or daughter.’
Mumps can be contracted by person to person contact with saliva and by coughing or sneezing.
Symptoms include fever, headache and swollen tender salivary glands.
Mumps symptoms typically appear 12-25 days after exposure, and symptoms are usually resolved within 10 days.
Those who fear they may have mumps are being told to stay at home, do not go to school, and contact their GP.
Parents are also being asked to ensure that they have two doses of MMR vaccine.
“The best protection against mumps is to be fully vaccinated with 2 doses of the MMR (Measles-Mumps-Rubella) vaccine” which can be obtained from a GP.
Children are generally recommended the MMR vaccine in their first year of life, and again at the age of 5 or 6, through a National immunisation programme.
Since 1988 when the MMR was first introduced, the largest outbreak of mumps occurred in 2009 with health officials blaming a slump in the take up of the vaccine.
Older adults, and those born after 1978 who may have only had one dose of MMR, are being encouraged to get vaccinated.
The Health Protection Surveillance Centre reported 491 cases of the illness in the Southern Health Board Region last week.
2019 was the worst year for cases of Mumps in second and third level institutions, with the HSE recording 2,762 cases nationally compared to 563 cases the previous year.
The HSE say 91% of children in Ireland have received one dose of MMR by 24 months of age.
The International standard is 95% to prevent outbreaks of Measles Mumps and Rubella.