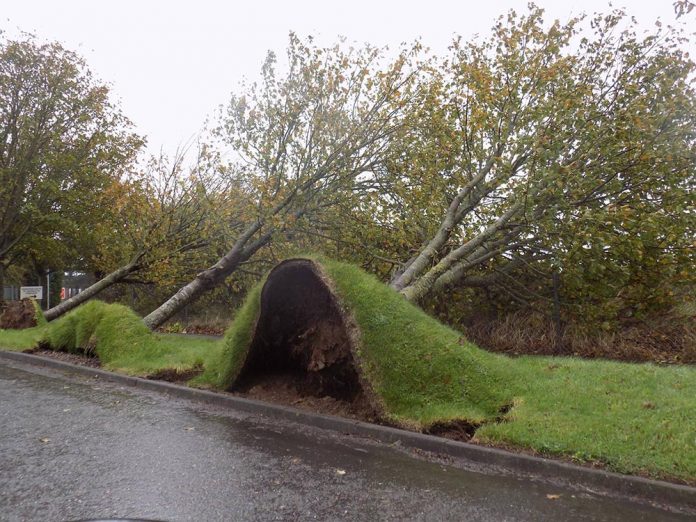 With more wind and rain set to batter East Cork, families and businesses throughout the region are left counting the cost of ex-hurricane Ophelia.
A low pressure system is tracking towards the south coast that will bring with it heavy rain and high winds.
Met Eireann say while the weather system is not an ex-hurricane it’s likely the areas that were most affected by Ophelia will bear the brunt of the gale force winds.
Heavy rains are predicted for tonight Thursday 19 October with sever gusts due to make land late Friday night, early Saturday morning.
Cork County Council say they are currently monitoring the situation and are encouraging the public to exercise caution over the coming days.
The local authority say they have already received over 600 calls in relation to fallen trees throughout Cork.
Many roads across the county were impassable with the local authority concentrating on national and regional roads.
While crews are working to clear roads the public are being asked to report any remaining blocked roads on 021-4800048.
The local authority say they are currently carrying out an assessment of towns and villages.
The council is also undertaking an examination of the impacts to coastal infrastructure including piers, harbours and pontoons.
The ESB say the extent of the damage to its network will take at least a day and a half to cut through trees before they can look at connecting some supplies.
Its estimates that over 450,000 homes were out of power on Monday 16 October with Vodafone stating their network had been severely affected.
Generators were deployed to both Cobh and Youghal in order to sustain continuity of water supply.
Cork County Council, the ESB and Irish Water are working together in relation to restoring water supply to those effected. Priority is being given in order of population served.
The insurance federation say damage to cars caused by the storm is covered by insurance.

Although it appears anyone who may have travelled on unnecessary trips during Ophelia may not be covered depending on their insurance.

Monday’s storm claimed the lives of three people one person was named as 58 year old Clare O’Neill a cancer care nurse with ARC house in Youghal.
Ms O’Neill died when a branch of a tree fell on her car between the villages of Clashmore West Waterford and Aglish on the R671.
Ms O’Neill’s mother who is in her 70s was in the car at the time when it crashed almost 1 mile from home.
A second fatality was that of 31 years old Michael Pyke he was using a chainsaw to clear a fallen tree in South Tipperary but was injured by a falling branch.
The third person to lose their life was a married father of two young children Fintan Goss from Co Louth. Mr Goss‘s car was struck by a fallen tree on the main Dublin to Belfast road as he made his way home during a lull in the storm.

Youghal – Midleton greenway decision- a short-sighted denial of our basic...