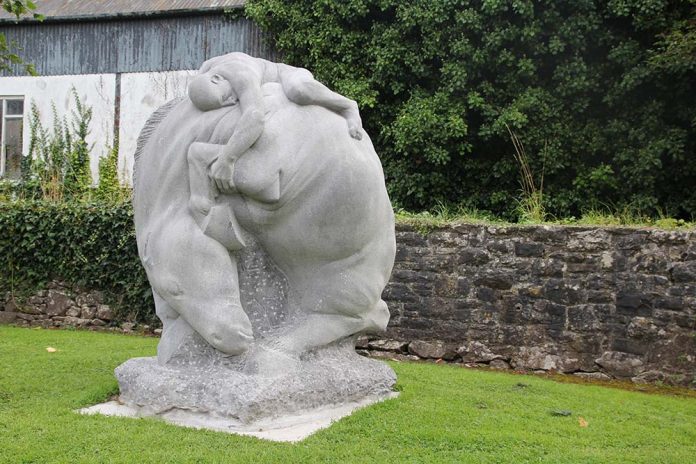 Thanks to the kind agreement of the residents in Beechwood some years ago the statue titled “Fallen Horse and Rider” has been relocated to a more prominent site at Kennedy Park. This initiative was inspired by the desire to integrate this statue into the Midleton Public Arts Project approved by the former Midleton Town Council in 2013 and to share this artwork with more of the general public, residents and visitors alike. The residents in Beechwood are deserving of acknowledgement and thanks for agreeing to share “their” statue with us at this more prominent location. The relocation was efficiently carried out by Edward Sheedy Memorials, Youghal Road, with the ubiquitous Town Foreman, Billy Buckley. Edward Sheedy Memorials also gave both Horse and Rider a fresh grooming.
This artwork was commissioned by the former Midleton Urban District Council under the Percent for Art Scheme and it was put in place in the original site in 1994. The work was created by sculptor Michael Quane and people may be familiar with similar works by this artist, “Figure Talking to a Quadruped” (UCC, 1994) and “Horses and Riders” (Mallow, 1995). The artist emphasises that these sculptures should be seen as a body of work rather than three separate commissions. The artist states that “Each one is concerned with connectedness and isolation” and that “they are also a development of my approach to the central concern within the three works: evolutionary, historical and social connectedness co-existing with individual isolation”.
This sculpture is beautifully carved from a single block of Kilkenny limestone (187x160x180cm). The effectiveness of this sculpture lies in the tension between the two main elements, the horse and the rider, which, although separate beings, are inextricably linked together even as they have fallen. There is a sense of primitive power and strength in both horse and rider. The connectedness mentioned by the artist is obvious and the isolation, in both horse and man, is palpable. The artist describes this sculpture as an exercise in pathos and adds, “it is anti heroic”. This description becomes all the more accurate if “Fallen Horse and Rider” is compared to more typical Classical and Renaissance equestrian sculptures such as “Il Gattamelata” by Donatello. “Il Gattamelata” reflects triumphalism and privilege – “Fallen Horse and Rider” evokes sadness at the loss of power, strength and life.
The new location for this sculpture helps to connect the “Kindred Spirits” Choctaw Monument in Bailick Park with this artwork and then with the “Angel of the Cassiar Mountains” Nellie Cashman Monument on Riverside Way, the “Gyrator” and “Gooseboy and Flock of Geese” at the Gooses Acre, the “Pikeman 1798” at the Courthouse, the Clonmult Monument and the John Walsh Memorial on the Monument Site, the “Poppy Wreath” First World War Memorial on the Archway to the Green Car Park and the “Sheep and Pillar” sculpture in the market area on the Fair Green.
Regrettably not everyone appreciates the talent and imagination and high quality of work which artists invest in their creations and the inspiration and pleasure which these artworks provide for us. The fine, well researched and meticulously detailed bronze sculptures of the “Pikeman 1798” has been vandalised and damaged on a number of occasions. This beautiful work was, in effect, “gifted” to the town of Midleton, payment having been made for materials and foundry work only. This sculpture of a Pikeman represents and commemorates the sacrifice of thousands of “ordinary” men who gave their lives for the freedom and the rights which each of us enjoy today. It is unacceptable and incomprehensible as well as being reprehensible that anyone would vandalise and damage such a beautiful work of art and be so disrespectful to the memory of our forefathers. We may hope that those who have done this damage may yet come to regret their disgraceful behaviour and act responsibly in the future. Out of respect, for the artist, Mr. John Toomey, and for our heritage and those who bravely fought our cause, the sculpture will be removed for repair and will be returned to its location after the community CCTV System is in operation, which system will enhance security surveillance around the Courthouse and throughout the Town Centre for the benefit of all.
Midleton is very fortunate in having such a large number of fine sculptures and monuments in the public domain, adding to the interesting experience which the town provides to visitors and reminding all of us of significant events and activities in the past. It is encouraging to see how many children relate to and enjoy the artworks.

Busking Time for Tilara at Ballycotton 10

The Cost Of Producing Electricity Rose By 11% Last Month