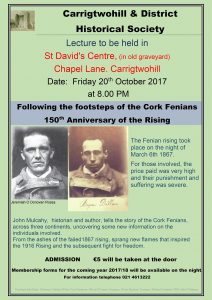 The Fenian rising took place on the night of March 6th 1867. Betrayed from within by informers and dogged by bad weather and failure in communications, it was doomed from the start.

Bands of armed men set out all over Co. Cork in an attempt to attack small police barracks and coastguard stations and obtain arms. The main body from Cork city marched through Blarney to attack the barracks at Ballyknockane, Mourneabbey. In East Cork an attempt was made to capture the coastguard station at Ballymacoda. Midleton and Carrigtwohill also saw action. The rising was a failure.

For many historians the story ends there. But for those involved, the price paid was very high and their punishment and suffering was severe. Historian John Mulcahy follows the story of the Cork Fenians across three continents uncovering some new information on the individuals involved. From the ashes of failure sprang new flames that inspired the 1916 Rising and the subsequent fight for freedom.