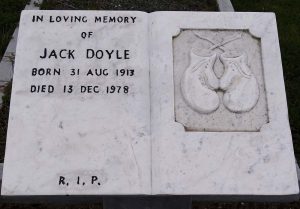 A call has been made at the September sitting of the Cobh Municipality, to start a fund to raise a statue in Cobh in honour of local hero Jack Doyle.
Born on the 13 August 1913 into a working class family, Doyle was at one time a contender for the British Boxing Championship, a Hollywood actor and a Tenor.
The appeal came from Independent Cllr Diarmaid O’Cadhla.
He told the sitting, erecting a statue in the town centre would be a great attraction and would be very popular amongst the people of Cobh.
“Aside from the respect of the individual’s achievement, as a heritage town, there is great advantage to come to Cobh by the erection of such a figure.”
Carrigtwohill based, Fine Gael Cllr Anthony Barry who backed the move said he too would be fully supportive of such an initiative.
Independent Cllr Kieran McCarthy said he too would like to see a statue of the contender erected in the town.
Currently there are two plaques in Cobh to its famous son, one in the promenade with the second located close to his place of birth the holy ground.
The representatives said it was only fitting a statue should adorn the town to The Gorgeous Gale.
Following a celebrity wedding to Hollywood actress Movita Castaneda in Dublin's Westland Row Church in 1939 they toured both sides of the Irish Sea, selling out music halls and opera houses.
Around this time Jack fought his last professional fight, against a journeyman called Chris Cole in front of 23,000 in Dalymount Park, Dublin. Arriving late for the bout after a stop at The Clarence Hotel for refreshments, the inebriated Doyle went down in the first. Movita packed up and moved back to Hollywood, where she went on to marry Marlon Brando.
Shortly after, Doyle found himself in Mountjoy Jail, Dublin for knocking out a Garda Detective in a Ranelagh pub. He moved to England and his spiral downwards into alcoholism and bankruptcy continued..
In 1947 Doyle was imprisoned in Sligo Gaol for issuing a cheque which later bounced. He served four months of hard labour.[4] He died in 1978 at St. Mary's Hospital in Paddington. At the time it seemed he would be buried in a pauper's grave in London. However, when news of his death reached Ireland a number of members of the Cork Ex-Boxer's association decided to act. In conjunction with Cobh undertaker Paddy Barry they brought Jack's remains home.
Large crowds lined the streets of Cobh as the coffin led by a lone piper and topped with Jack's trademark - a red carnation - was brought on its last journey. He was buried in the Old Church Cemetery and his grave is visited by thousands of people every year.

Youghal Trad for Trocaire Fundraiser Launched by Cherish the Ladies

The Emotional Power of Greta Thunberg