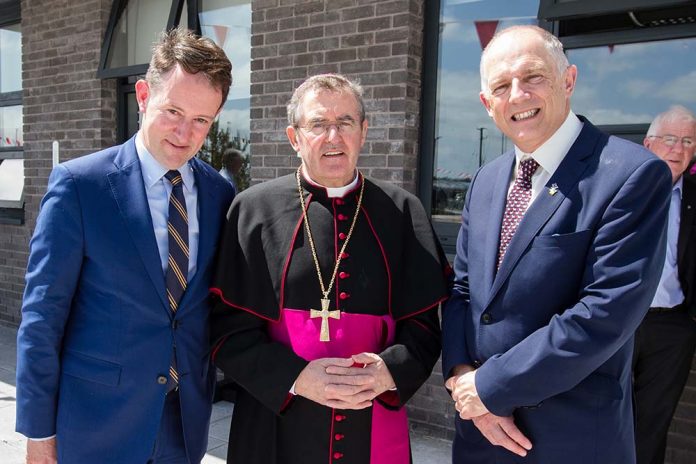 Gaelscoil Mhainistir Na Corann was officially opened at a special ceremony by Bishop of Cloyne Dr William Crean on Friday 16 June.
He was joined by Monsignor Gould, Deputy David Stanton Junior Minister at the Department of Justice, TDs Sean Sherlock and Pat Buckley as well as Cllr Danielle Twomey.
The new school was sanctioned in 2014, almost 20 years after a group of individuals passionate about Irish language and culture had the vision of setting up a Gaelscoil for Midleton.
Bishop Crean said the Gaelscoil’s “vision encapsulated all that is best in our culture and spiritual tradition as a basis to form new generations, to embrace the challenges of modernity and to do so with confidence.”
In August 1999 the Gaelscoil opened in the Midleton Community centre with 17 students, today that figure has grown to almost 500.
Priomhoide Mairead Ui Fhloinn said the journey to the establishing of a Gaelscoil was not an easy one.
She said “obstacles were in every corner” but “passion and vision spurred us on”
“The community centre was never designed to be a school and while we had 17 extremely happy years there, the search for our own school building for the children of Mhainistir Na Corann began in 2001.”
After a number of failed attempts to find a suitable location, ground was broken at the Baneshane site in 2015 and construction was completed a year later.
The facility includes 24 class rooms, there are 477 pupils enrolled in the faculty that caters for both boys and girls.
Chairman of the board of management Niall O’Neill paid tribute to both Deputies Sean Sherlock and David Stanton for their assistance in delivering the state of the art facility.
After the official opening staff, parents, students and invited guests enjoyed teas, coffees, sandwiches and sweet treats in the school’s auditorium.