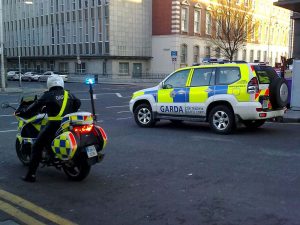 Senior Garda management in Cork County say crime rates and drunkenness offences are on the increase across the county.
All three divisions across the county recorded an increase in property crime, crimes against the person and drink driving detections between April and June when compared to the same time last year.
Incidents of property crime are up 176 to 1519 with crimes against the person also up on last year’s figures by 79 reflecting 648 recoded incidents.
Super intendant Con Cadogan told a sitting of Cork County Councils Joint Policing Committee on Monday 24 July the force have also recorded a 28.5 % increase in the arrest of suspected drunk drivers.
The Super Intendant attributed the countywide increase in drunkenness offences minor assaults to an improving economy.
In the Cork North division, which covers East Cork saw an increase of suspect Drink Driving detections increase from 69 in the second quarter of 2016 to 77 for the same period this year.
In Cork City, Gardai detained 107 drivers on suspicion of driving while intoxicated an increase of 30 on the corresponding period in 2016, Cork West also saw an increase from 40 to 55.
Across the County the force detained 312 people for drunkenness offences an increase of 20 incidents recorded in 2016.
Assaults causing harm saw a slight increase from 101 incidents recorded in quarter two of 2016 to 104 recorded for the same time this year.
Minor assaults have increased for the same time period from 325 incidents recorded in 2016 to 374.
Vice Chairman of the Joint policing committee Cllr Timmy Collins said he was “surprised” to hear there was so much drink driving on the roads.
He said it was only a matter of time before the Gardaí were going to catch them if they insist on drinking.
Fianna Fail TD Kevin O’Keeffe said he was not in favour of Minister Shane Ross’s get tough approach to drink driving, he said the higher detections were a direct result of increased check points.
“It’s acknowledged that there is a greater garda presence on our roads. If the patrol car see a cat in the driving seat they’d nearly bag the cat you’ve got so rigid in your enforcement.”
Superintendent Cadogan agreed.
Labour Cllr Cathal Rasmussen said he believed in a “zero tolerance” approach to drink driving.
Deputy O’Keeffe said he was unable to obtain the figures of those detained on suspicion of drink driving the morning after.
Superintendent Cadogan said the numbers were not available but would seek to provide them at the next sitting of the committee in October.
He said a number of arrests were made following crashes while others took place the morning after highlighting the dangers of underestimating the effects of the previous night’s drinking.
Superintendent Ger Dillane commented “it takes an hour for a half unit to leave your system. If you are over the limit the following morning you must have had some feed of drink the night before. People should show some personal responsibility.”
126 non-serious injury road traffic accidents were recorded between April and June with 102 recorded in the corresponding period last year.
Material damage to vehicles was recorded at 1,292 and increase of 55 on the previous year.
The force recorded a reduction of fatal road accidents on Cork roads. There were 3 fatalities on our roads (they involved two pedal cyclists and one vehicle).
There were 7 lives lost on our roads for the same three month period in 2016.

Carrigtwohill Community Council are Seeking the Public’s Suggestions on the Current...

The Cost Of Producing Electricity Rose By 11% Last Month