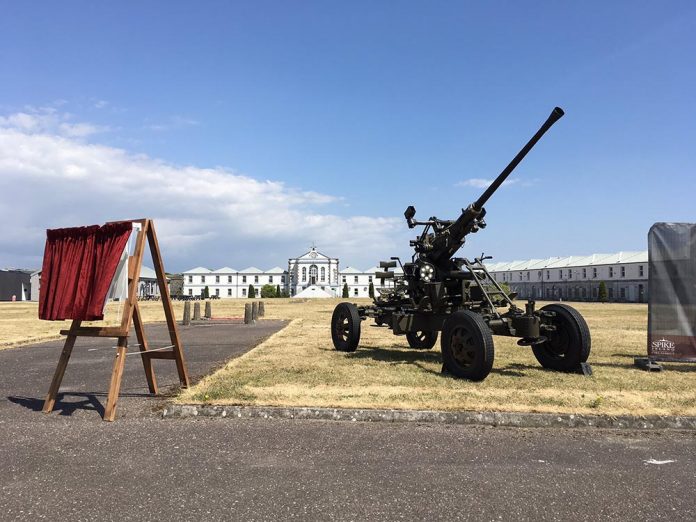 A Military guard of honour, a 21 gun salute, and fly past from the Irish Air Force helped mark 80 years since Spike Island and the Cork harbour Forts were handed back from the British to the Irish.
The Irish Tricolour was ceremonially raised on all three harbour forts and in Cobh’s Promenade yesterday (11 July) in commemoration of the handover of the Treaty Ports in 1938.
The Tricolour was raised for the first time ever on Spike Island at 8 pm on 11 July 1938 by then Taoiseach Eamon De Valera.
It was an occasion for great celebration in Cobh and around Cork Harbour as earlier in the day British troops had vacated the harbour forts.
An account by a witness in Cobh recorded the events in a letter to her sister; “We got in just as the Tricolour crept up the flagstaff on Spike Island and in all my life I never before felt anything like the sensation I got when that flag went up. All the crowd (40,000 people in Cobh) roared as loud as their lungs could go, they jumped, clapped and waved their hats, even as I think of it I could still break my heart crying. I was grand. The pipers on the mainland then played the National Anthem and there was no more to be seen than only the flag flying over the harbour. There was just a lovely breeze there and it used allow the flag to open its folds and then it would lift up itself and wave!” (July 12th, 1938)
Yesterday in sweltering heat almost Military personnel, politicians, and citizens stood in silence as the 80th anniversary was marked.
Spike Island’s General Manager John Crotty said that “On that day in 1938 our island nation grew just a little larger in size, but infinitely larger in stature”.
Mayor of Cork County Cllr Patrick Gerard Murphy noted how even after the Treaty of 1921 the harbour forts were considered so important it took a further 17 years before Fort Westmoreland on Spike island would come under Irish control for the first time.
Since 1938 Spike Island has been used by the Irish Army during 'the Emergency', until 1979 before it was handed over to the Irish Naval Service, became a prison once again in 1985, until 2004. It is now a top tourist success.
Despite winning a number of international tourist awards it will take some time before Cork County council break even on their investment.
Officials say in order to recoup their investment the island needs to attract 100,000 visitors annually.
The tourist attraction is expected to break all records this year with industry experts predicting total numbers for 2018 to be in the region of 50,000.
The projected figure represents a 20% growth on 2017 numbers with almost 12,000 visiting the island in June alone.
A tender for a second ferry is expected to be granted next month but will not be operational until early 2019.
Cobh Municipality CEO Paraig Lynch said while the figures are encouraging, the island cannot grow until that is put in place.
“With a shuttle service in effect you can get 80 passengers on and off Spike every half hour from 10am to 3:30pm. If you do that in June, July, August and September you get your 100,000.”