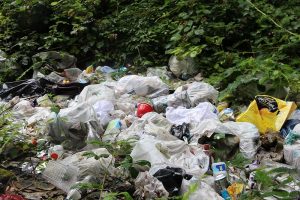 A disused section of rail line has been turned into a blot on the East Cork landscape.
Household rubbish, used nappies, food wrappers, empty cans and naggin’s have been thrown over the railway bridge on the Dungourney road, close to the entrance of Broomfield Village in Midleton.
The track which was closed to trains in 1982, forms part of a new route, linking Midleton and Youghal, which Cork County Council want to transform into a biking and walking trail.
The greenway project is designed to make cycling and walking between East Cork's towns and villages safer.
It’s estimated the pile, which is on land owned by Irish Rail is almost 400 feet long.
The rail network say they have granted a licence for Cork County Council to go in and clean up the area.
They say illegal dumping is a major issue for them and they work hard to eradicate it.
Irish rail say they carry out regular clean ups in association with local authorities to tackle heavily littered areas as well as the monitoring of locations to gather evidence against offenders.
Cork County Council have also received permission to review the route at ground level between Midleton and Youghal to develop the site into a Greenway, similar to that in Dungarvan.
Bills and other mail suggests refuse as recent as 13 July has been dumped along the track.
The local authority have confirmed an investigation is currently underway and once completed the site will be cleared.
They say action will be taken if enough evidence is found.
If the East Cork Greenway is developed the project would have huge potential to bring more jobs to rural communities along the route.
In Mayo a 42KM stretch of disused Great Western Railway extending from Westport to Achill, brought the area back to life since it was opened in July 2011.
The greenway project there have a system called the Green Patrol who monitor litter while carrying out general maintenance.

Minister for Health publishes Report of the Working Group on Access...

Decision on Ringaskiddy Incinerator Due Within Days