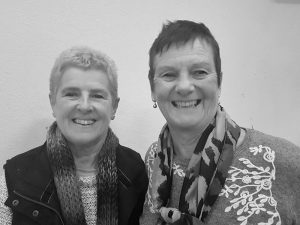 Ardmore Players are thrilled that tickets are flying for their upcoming production of Widows' Paradise, with Saturday, 25th November a sell out and it's looking like so too will be Friday, 24th and Sunday 26th. Widows’ Paradise, a three-act comedy by Sam Cree and directed by Declan Hennessy, promises to be one of the funniest plays the group have staged to date.

This farcical comedy is set in the 80s and the action takes place in a seaside caravan with five ladies embarking on a strictly Women Only weekend away.

Ruby (played by Claire Flavin) is a strong-willed widow with a decided distaste for all men and is adamant to make the other four ladies follow her lead and write-off the opposite sex for a life of peace and quiet.

Her fellow musketeers follow somewhat bewildered with this quest. Lucy (played by Ita Keevers) is a dizzy loveable character who must hide her never-ending faith in finding true love. Vanessa, another widow (played by Linda Troy) is only interested in the finer things in life but has she an agenda of her own in taking this trip ?

Then we have Rachel (played by Carole Troy) a relationship lightweight, whose overall fear of men makes her one of the most entertaining characters thrown into the female mix. These self-confessed widows are followed by Ruby’s gorgeous daughter, Sylvia (played by Saoirse Moloney) who has been taken along on the trip to learn from their mistakes.

A case of mistaken caravan identity sends the Widows’ Paradise into disarray with the subsequent arrival of no nonsense alpha-male Harry (played by Séamus Keevers), his dim-witted sidekick Ernie (played by Anthony O’Brien) and Harry’s handsome young son Alan (played by Ciarán Keating). Add a couple of surprise visitors in the form of Wilfred and Farmer John (hilariously played by John Supple and Michael
Lynch) and you have what can only be described as hysterical chaos.
What was supposed to be a scene of peace and quiet turns into a riotous clash of the sexes, each of the ten characters with his or her own story to tell !

The Ardmore Players Cast and Crew have been busy building the set and doing rehearsals for what promises to be a cracker of a comedy. This week we introduce you to the Director, Stage Managers and remaining cast members.

Saoirse became involved with us through her Gaisce Award and has been involved behind the scenes since our first production and we are delighted to have her on stage this year playing the part of Sylvia, daughter of Ruby who has been taken along on the trip to learn from the others mistakes of the other ladies. It’s a busy year for Saoirse as she is studying for her Leaving Cert after which she hopes to pursue a career in nursing. She is a keen swimmer and an Irish Water Safety Instructor.

Linda has a keen interest in all aspects of drama and has been involved from the beginning with Ardmore Players behind the scenes and played the part of Cora in last year’s production of The Real McCoy.
This year she plays a widow, Vanessa, who is only interested in the finer things in life but has she an agenda of her own in taking this trip ? Linda is a mother of one and loves reading, walking and spending time on the beach. She previously performed as Cora in The Real McCoy last year and previously in Annie and Oliver when younger and also took part in Scor na nOg.

This is Ciarán’s first production with Ardmore Players and we are delighted that he has joined us. He plays Harry’s handsome young son Alan. Ciarán is no stranger to the stage and had the main role in ‘Joseph and the Technicoloured Dreamcoat’ during his Transition Year in St Augustine’s College. He is a keen GAA player with our local club and has won a Munster Football and Hurling Medal and an All Ireland Hurling Medal with his school.

John Supple treads the boards as Wilfred McNeilly, long lost husband of Rachel. A native of Ardmore John is married to Mairead and has two daughters. John is the founder member of Ardmore Players and has been involved in numerous organisation and committees within the parish over the last number of years. His stage experience comes from his involvement in Scór with Novelty Acts winning Munster Titles and All- Ireland appearances. He is currently a provincial and national judge in Scór and has also been involved in productions with Aisteoiri An Séan Phobal and more recently on stage with the inaugural production of Síve here in Ardmore in 2015.

This is Michael Lynch’s third time on stage with the Ardmore Players.
This year he plays the part of farmer John, the owner of the caravan park. Michael is a native of Ardmore. Michael is married to Ruth and has two grown up sons and grandchildren. A retired member of the Ardmore Fire Service, in his spare time he is still volunteers as part of the Ardmore Unit of the Irish Coastguard.

We wish to thank our Stage & Wardrobe Managers, Catherine Murphy, Chris Ramsell & Violet Howard for their tremendous support in the last number of weeks, we could not do it without you ladies.