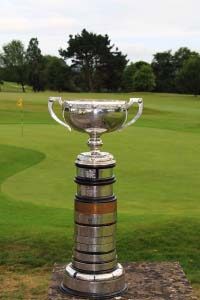 The Golf Society of the Midleton CBS Secondary School Past Pupils Union recently won the 75th William Dwyer Trophy at the finals played at Cork Golf Club.
The Midleton CBS PPU Golf Society team came out on top against seven other teams and took home the William Dwyer Trophy with a score of 214.
The competition is Ireland’s oldest inter-society event and was started in 1942 by the Dwyer family, which was famous for textiles.
“It was started by William Dwyer who owned Midleton Worsted Mills and a few other places in Youghal and Cork,” said Michael John Roche, Captain of the Midleton CBS PPU Golf Society team. “The trophy was put up by his family. The competition was started in 1943 and has been going since. This is our third time winning it. Our first time winning it was in 2002 and we won it again in 2006. The competition was originally between businesses that had golf societies. This year 20 golf societies were involved. There were two qualifying play-offs in Mahon with eight societies going through to play in the final. We won it.”
Captained by Mr Roche, the Midleton CBS PPU Golf Society team was split into duos comprised of Mr Roche and Cormac Carroll, Bernard Cashman and Paul Cashman, Dereck Coll and Maurice Conway, and John Moloney and Bob Cotter.
The format was foursomes with the best three scorecards counting from the four pairs, with the fourth card saved unless there is a deadlock between teams.
“You play against the course and you end up with four cards,” said Mr Roche. “The three best cards count and in the event of a tie the fourth card comes into it. We had two cards of 71 and one of 72, so our total was 214. The next best team to us had 228, so we won by 14 which is substantial, a fairly convincing win.”
The Midleton CBS PPU Golf Society team finished ahead of the Mollies from Blackrock, with Wilton Shopping Centre coming in third by a margin of one shot. The Munster & Leinster Bank (now AIB Bank) were the original winners back in 1943 and won the competition a record five times. In all there have been 45 different winners over the past 75 years.