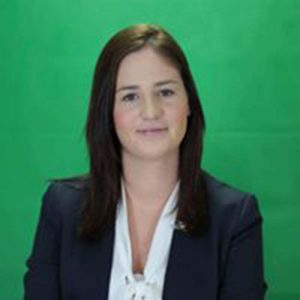 Sinn Fein Cllr Danielle Twomey is taking the East Cork Municipality to task over its policy of behind closed-door meetings.
Cllr Twomey has said the boroughs use of in camera meetings was “seriously worrying.”
The Midleton based Cllr said since she was co-opted to the Municipal District a year ago, seven in committee meetings have taken place.
She said, “The more I looked at it the more I realised what is being done is wrong.”
The elected officials are making compromises and cutting deals on discretional funding and deciding budgets, out of sight of the taxpayers whose money they’re spending, she said.
“That’s not transparent, that’s not accountable. The public should at least have a say.”
The Local Government Act 2001 states the public and media can be excluded from meetings when issues of a “special nature” are being discussed.
Cllr Twomey believes the legislation is too ambiguous leaving the law open to interpretation.
The Midleton based councillor said she felt the private sessions were more about “protecting egos “than dealing with sensitive issues.
A recent in camera meeting was used to discuss a leak in Youghal’s newest tourist attraction the Clock Gate, the retro fitting of the public conveniences at Garryvoe beach, Red Barn and Front Strand Youghal and a proposal for a car park at River Street Cloyne.
At the same meeting through the Town Development Fund, Youghal Socio Economic Development Group were allocated €25,000, where two Councillor’s sit as voluntary members.
The monies were given for the expansion of the East Cork Municipal District Clock Gate project and website development and maintenance.
The voluntary group are also made up of representatives from SECAD, senior members of Cork County Council, representatives of the East Cork Municipality executive and Chamber of Commerce Youghal.
Municipality Chairwoman Mary Linehan Foley said she had “no issue” holding discussions on public realm money in the open.
She said when it's public Monies Cllr's should always be open and Transparent and in her time as a public Representative she has always been open about how monies are spent and divided up Equally and Fairly in all the District.
The outgoing chairwoman said Cllrs agreed a pact to hold future meetings in committee following a very public dispute between the boroughs representatives over the division of the town development fund last year.
She said she was used to discussing public realm money in the open at Town Council level however Cork County always held their talks in private.
The Municipal Chairwoman added “the director of services has always advised on where the monies should be spent and councillors would then discuss amongst themselves before being brought to a public meeting for a final vote. “
Earlier this week in an open letter Micheal de Buitleir from Bru Na Si Cultural Centre in Youghal, called on the areas Cllrs to end internal wrangles and serve residents.
He said “meetings behind closed doors do little for the confidence of communities.”
Speaking of recent media reports of in committee closed door meetings he said “there is obvious conflict between representatives of Midleton and Youghal.” “The situation as deceived in the report is not healthy and a more objective community evaluation process needs to become more open and transparent.”

Cloyne Music Festival in Aid of Round Tower Restoration Begins This...