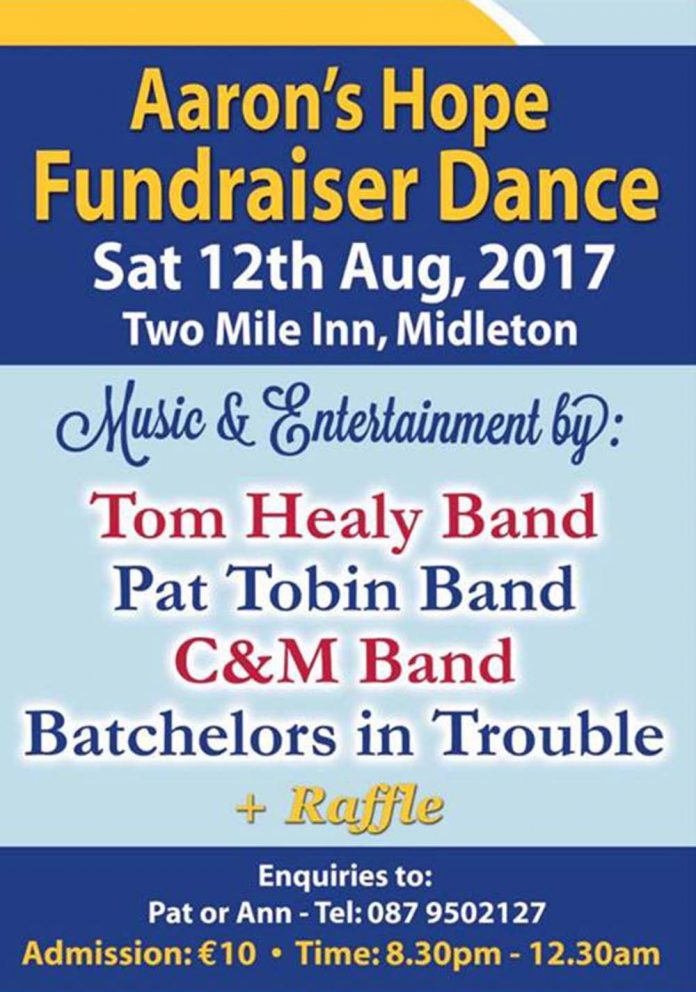 Midleton will play host to a Fundraising Dance and a Coffee Morning this Saturday, 12 August, with both held in aid of Aaron’s Hope
Hosted by the Two Mile Inn, the Fundraising Dance will begin at 8.30pm and run until late with admission for the event priced at €10. The proceeds from the Dance will go towards Aaron’s Hope, a fund set up to raise money to cover the treatment costs for Aaron McMahon who was diagnosed with a rare form of cancer.
The performers on the night include the Tom Healy band, C and M band, Pat Tobin band, Bachelors in Trouble, and John and Michelle Cotter.
“John and Michelle Cotter are joining the performers on the night too,” said Ann, one of the event’s organisers. “Michelle previously appeared on Glor Tire on TG4. We will also have a raffle. We would like to wish Aaron well and wish him the best of health and the best of luck. He and his family were our neighbours for years in Cloyne and we know them well, so we would like to wish him the best of luck.”
My Place, Midleton will host a Coffee Morning to fundraiser for Aaron from 10am-1pm on the same Saturday as the Dance, 12 August.
Russell Rovers GAA held a Family Fun Day at its GAA grounds last Saturday, 6 August in aid of Aaron’s Hope and, despite the inclement weather, it was very well supported.
Aaron McMahon, from Shanagarry, was diagnosed with a chordoma of which 80% was removed during brain surgery this past March. Aaron’s Hope was established in order to raise money to cover the cost of specialised radiation treatment in Essen, Germany, which Aaron, a student at CBS Secondary School, Midleton, sought earlier this summer.
A GoFundMe account can be found under Aaron’s Hope, with more information available at the Aaron’s Hope Facebook page.

Midleton Toastmasters – Learn to present and persuade on purpose