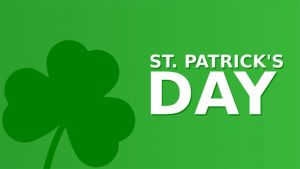 The Midleton Patrick’s Day Parade is all set to return with its floats and music next month. Organisers say while preparations are in full swing for this year’s carnival they are looking for extra volunteers and interested community groups and organisations to sign up.
This year’s grand parade will take place on Saturday 17 March at 3:00pm, and promises to be a fun day for all.
40 Shades of Green is this year’s theme and the parade committee are also eager to have more women’s organisations to get involved, to mark the centenary of suffrage in Ireland.
2018 Marks the 100th anniversary of women being granted the right to vote and stand for election.
Parade Committee Chairman Tony Harpur said “we would like to mark the occasion in some way by encouraging more women to get involved.”
Entries for this year’s parade can be obtained from Midleton and Area Chamber of Commerce who are supporting the event.
Perspective volunteers and parade entrants are asked to email info@MidletonChamber.com on or before Monday 5 March.
Cost of entry is €50 per group with prizes of €500 for best float, 2nd €300 3rd €150.

Mandy Hennessy is the Winner of the CRY Youghal Holiday Giveaway!