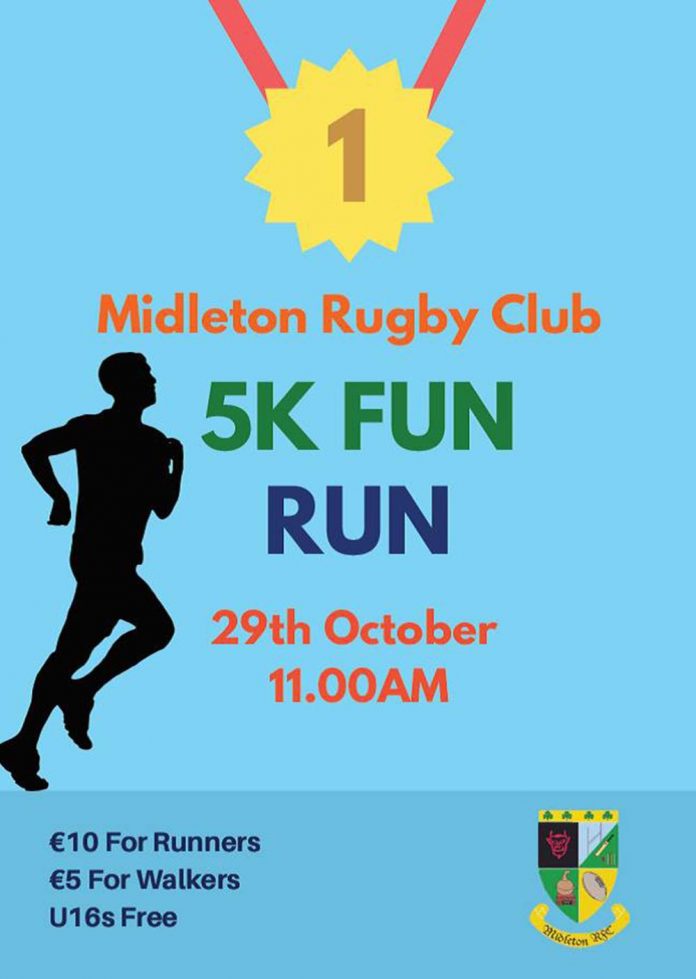 Midleton Rugby Club will host its first ever 5k Fun Run and Walk this Halloween weekend, with the event slated to take place on Sunday, 29 October.
The Fun Run and Walk will be open to people of all ages and abilities, with Midleton Rugby Club grounds serving as race headquarters. Registration will take place from 10am on with the runners setting off at 11am. Those walking the route will begin their journeys shortly afterwards at 11.10am.
The registration fee will be €10 for runners and €5 for walkers, with Under-16s permitted to take part free of charge. The proceeds raised will go towards the general running costs of Midleton Rugby Club.
In keeping with the Halloween theme of the weekend, fancy dress is encouraged and, while not mandatory, there will be a prize on the day for the best dressed. There will also be a host of other prizes on offer for the overall winners and the first past the line in various age categories.
The event is organised in conjunction with Midleton Athletic Club and its member Danny McCarthy and its route will take the participants around and through Midleton. After a lap of the pitches at the Rugby Club, the 5km route will depart from Towns Park and wind through Broomfield, past Avencore and head towards the Mill Road. Participants will then turn to pass the GAA Club and train station, with the route then leading them behind Hurley’s Supervalu, down Drury’s Avenue and then back towards Midleton Rugby club. The fun run and walk will finish with an additional lap of the rugby pitches to make up the 5km.
Those wishing to sponsor the race can contact Mr David O’Sullivan by email at midletonrfcpro@gmail.com or phone at 087 099 4144.

Midleton To Welcome Back Traffic Warden