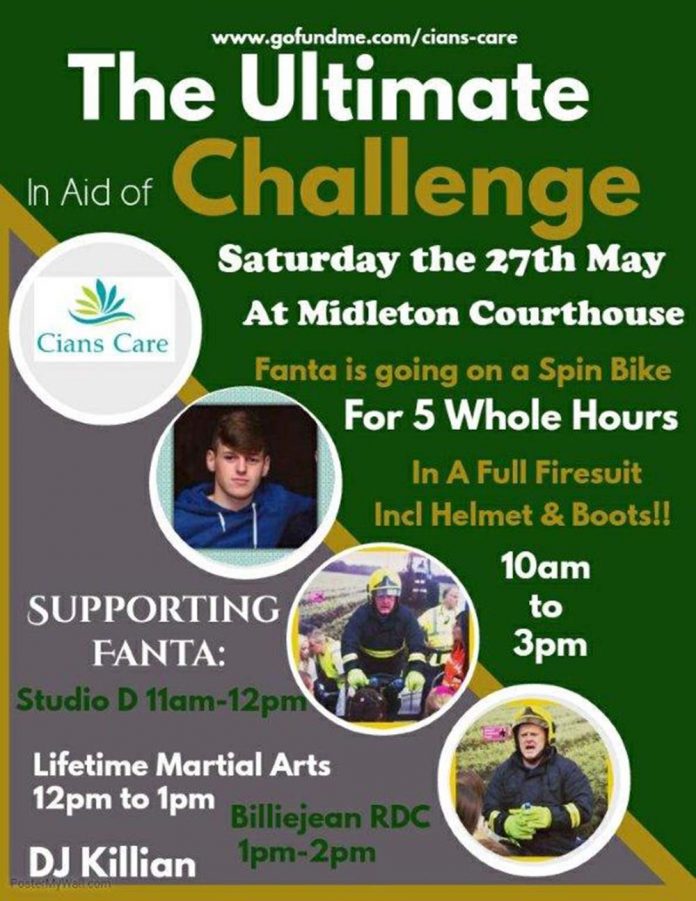 Mogeely will host a unique day-long fundraiser at the start of June involving a soccer match between two pubs and a night of entertainment in aid of Cian’s Care.
The Mad Match will be held to fundraise for Cian’s Care, a group set up to raise money for Ballinacurra’s Cian Twomey to receive specialised treatment for the rare form of cancer with which the 18-year-old was diagnosed.
On Sunday, 4 June two teams each representing either the local Sportsman’s Inn or the Imokilly Tavern will play in the Mad Match from 4pm at Mogeely pitch. A night of entertainment at the Sportsman’s Inn will follow the match, including the members of losing pub’s team undergoing either a head shave or a leg waxing. The night will feature music from Billy Cusack and the Two Dan’s along with a raffle and an auction.
The weekend before sees Midleton’s Mark O’Sullivan, better known to many as Fanta, cycle a stationary bicycle for five hours, without a break, also as a fundraiser for Cian’s Care.
Mr O’Sullivan will attempt the feat while wearing full firefighter’s turnout gear – which weighs approximately 40 pounds or more – outside the Courthouse in Midleton on Saturday, 27 May.
The Spinathon will also feature dancers from Midleton’s Studio D, Lifetime Martial Arts Midleton and Billie-Jean Sargent’s Rhythm Dance Company, while DJ Killian O’Reilly will be providing music throughout.
The Thursday before, 25 May, Cian’s school CBS Secondary School in Midleton will hold a fundraising concert for both Cian’s Care and Aaron’s Hope, which aims to raise money for 16-year-old Aaron McMahon, who suffers from a different rare form of cancer called chordoma, to undergo specialised radiation therapy in Essen, Germany. The headline acts for the concert are the Frank and Walters, Goldfish Syndrome and August Walk, and tickets are available at the CBS Secondary School and McCarthy’s Newsagents in Midleton.

To read full story click HERE and check out our digital edition.

Only 20 Mortgages Issued By Cork County Council In 3 Years