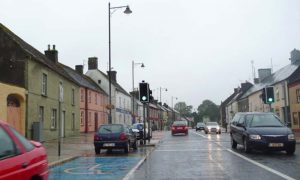 Plans for the construction of a pedestrian bridge close to the N25 in castlemartyr, has been given the green light to proceed to part 8 planning by the East Cork Municipality.
Pedestrians in the village often run the risk of being run over by vehicles as there are few crossing points along the busy N25.
Draft plans which would ensure accessibility for those on foot, the elderly and people with special needs have been drawn up and will go on public display shortly.
Eoin Bennett from Cork County Council’s Roads Department told the November sitting of the borough “Transport Infrastructure Ireland (TII) have committed to the appointment of a consultant for the detailed design of the foot bridges with a view to them being incorporated into the N25 works in Castlemartyr.”
The tender for the six month project, for the upgrade of overlay and footpaths, is due to be awarded shortly and will include improvement of traffic signals and remedy drainage issues at Knockane.
The area was submerged for almost two weeks following a series of Atlantic storms in 2016.
Once a contractor is appointed the N25 upgrade it’s expected the works will commence in the first week of January 2018.
A separate tender will be proffered for the bridge project, which is subject to planning and funding approval.
Councillor Danielle Twomey said she was “absolutely delighted” the project is being advance after campaigning for almost two years.
The Sinn Féin Cllr said for many years people living on the Killeagh side of Castlemartyr have felt disconnected from the village centre.
Independent Cllr Mary Linehan Foley however said she had her reservations the project would proceed to completion considering a similar promise was made in Killeagh.
“We were here with the [footbridge] in Killeagh subject to funding and it wasn’t incorporated and we are still here today waiting for the one in Killeagh.”
Mr Bennett said a decision on funding should be made in the New Year but the fact the TII have committed to undertake detailed design for the construction of the foot bridges was positive.

Cheltenham at Home in Youghal for Enable Ireland and CRY

Reopening of the Old Railway Line Between Midleton and Youghal is...

Dip in the Nip Makes a Big Splash at Pilmore Beach