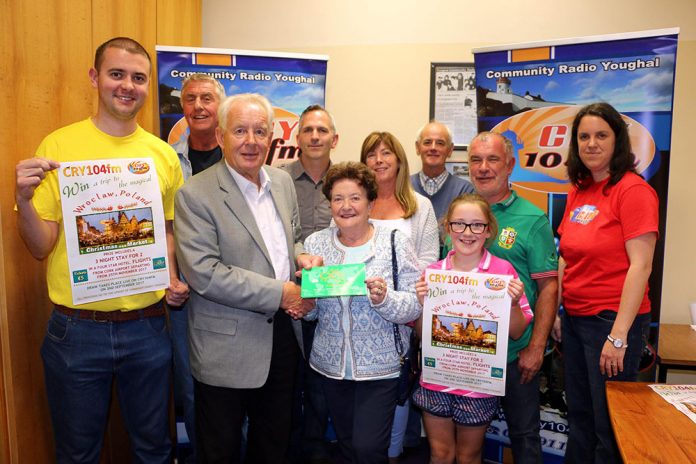 It was an evening of celebration at CRY104fm Studios, at Nagle House Youghal, on Thursday last, 7 September.
A special presentation was held to recognise the huge contribution made by local community groups to the Spinathon 2017, which was run in conjunction with the annual CRY104fm Radiothon. The aim of the Spinathon was for each team to pedal, on the spinning bikes provided by Aura Leisure Centre, for an hour, with the team that totted up the most distance in that time raising funds for a charity or community group of their choice.
The eventual winners of the one hour Spinathon challenge were the trio of Frances Wiggins, Peter Queally and Tim Montgomery, who pedalled more than 31 km between them. They chose to donate the top prize of €500 to Down Syndrome Cork.
On Thursday, Amelia O’Connor and friends of the Cork-based charity were on hand to accept the cheque, for which they were very grateful.
Youghal GAA club (Seamus Landers, David O’Mahony, John Grace and Nigel Roche) were the second best-team and received €100 – which they subsequently donated to Community Radio Youghal. Third in the Spinathon challenge was the two-man team of Brian Landers and Ronan Coleman from Youghal Cycling Club. They received a €100 prize, the proceeds of which are being donated to the Mercy Cancer Unit and YCC.
As well as the prizes for the Spinathon challenge, the winner of the ‘Trip to Wrocklaw’ raffle, Phil Fitzgerald, was presented with her prize on the night. The Youghal woman won a three night stay in Wrocklaw Poland, for the magical Christmas markets, with flights included. Phil is going to bring her daughter Ann on the trip later this year.
The ‘Trip to Wrocklaw’ draw was run by CRY104fm and MacDonald Lee Travel. All proceeds from the draw will go towards Community Radio Youghal.

Cobh’s Hendrick Verwey Finalist for Volunteer of the Year

Youghal Earmarked for One of Ireland’s First Solar Farms