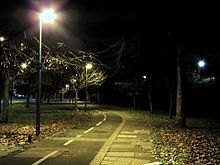 The 2017 East Cork Municipality street lighting programme will operate on almost €10,000 less than in previous years.

Since 2015 the borough has had an annual allocation of €48,000 to upgrade poor intensity lighting and link developments to urban centres.

Senior Engineer Cork Roads David Clarke told the June sitting of the borough he had received €39,835 this year to install or replace defective lighting.

Mr Clarke said he hoped to spend his departments allocation on two projects.

The replacement of three existing lights on Thomas Street Midleton and extend the public lighting towards Broomfield Village along the Dungourney road.

The senior engineer said the Broomfield project would be completed in two phases.

Phase one includes nine new lights and standards including underground caballing from Lauriston estate to the junction of Broomfield just past the rugby club.

Phase two of the scheme is expected to be complete next year.

Mr Clarke said the authority were in discussions with Irish Distillers to install the public lighting columns inside their property as the footpaths in the area are not wide enough.

Municipality Chairwoman Mary Linehan Foley said she would like to see LED lighting installed along the R634 towards the funeral home as the lighting in the area is dull.

Mr Clarke said it is policy to use lower wattage on the outskirts of towns and villages however he would request the public lighting department to review the area as it was an area of Youghal regularly frequented.

The independent Cllr had also called for major improvements to the existing lighting in Midleton Town Centre.

He said “in some areas a candle would be better.” “Now with the CCTV coming into operation we will need the light”

If there is no light the Gardaí would not be able to apprehend criminals. “One goes with the other” he said.

Mr Clarke said Lower Bailick road had been assessed by the public lighting department and it was deemed the lighting in the area was adequate.

Cycle Against Suicide Calls On Cork To Help Break The Cycle...

A Fundraising Night Table Quiz in Aid of “Parents Together in...