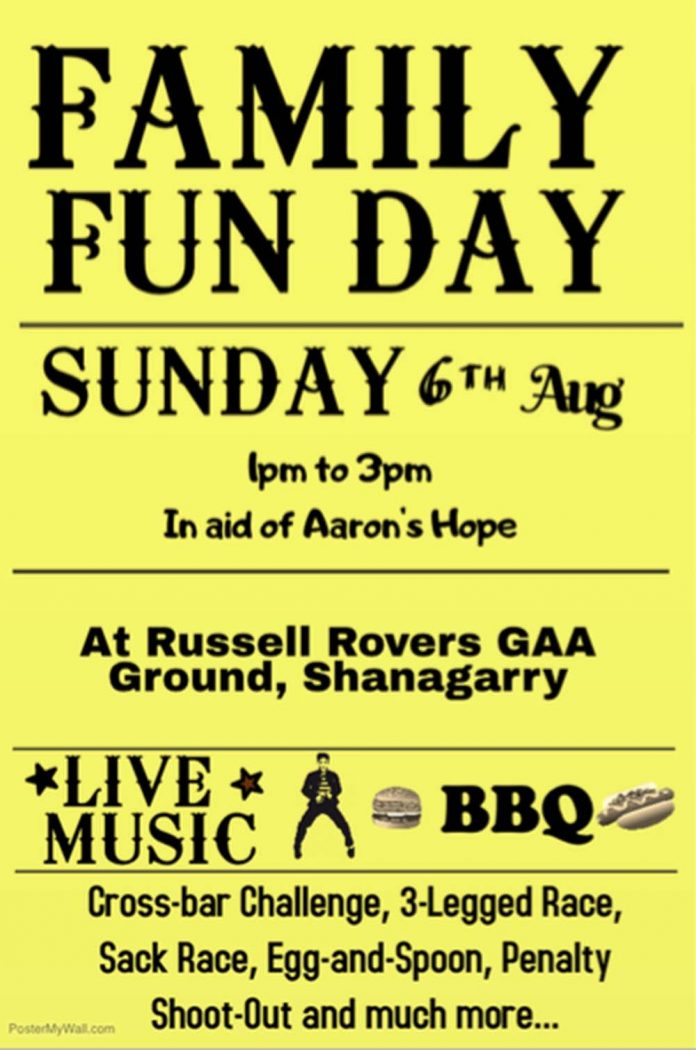 Russell Rovers GAA will hold a Family fun day at its GAA grounds in Shanagarry to fundraise for Aaron’s Hope this Sunday, 6 August.
The Family Fun Day runs from 1-3pm and will not have a cover charge. Instead donations towards Aaron’s Hope, a trust set up to fundraise for Shanagarry’s Aaron McMahon, a 17-year-old student who was diagnosed with a rare form of cancer earlier this year, will be accepted on the day.
Everyone is welcome to attend the fundraiser which includes a barbeque and live music provided by DJ Fish, along with a series of kids’ games including three-legged races, egg-and-spoon races, soloing, a penalty shootout, a crossbar challenge, a sack race and some games for which attending kids should bring along their hurleys.
Also on the day Russell Rovers are expected to unveil new jerseys which will feature the logo of Pieta House.
“Russell Rovers, as a sports club, is a big part of the community,” said Kieran Ivers of Russell Rovers GAA. “We don’t talk about it a lot but we have done some important work with Jack & Jill Children's Foundation, and Marymount [University Hospital & Hospice]. But unfortunately Shanagarry, Midleton and Ballycotton would all also be black spots for suicide. Even during the weekend of pitching the idea to Pieta house, someone in Ballynamona took own life. These jerseys will have the Pieta House logo on them to help normalise talking about it, and we plan to make the presentation of them at the fun day for Aaron.”
Aaron McMahon, a student at CBS Secondary School, Midleton, was diagnosed with a chordoma of which 80% was removed during brain surgery this past March. Aaron’s Hope was established in order to raise money to cover the cost of specialised radiation treatment in Essen, Germany, which Aaron sought earlier this summer.
Shanagarry Design Centre will hold a coffee morning fundraiser for both Aaron’s Hope and Cian’s Care (a similar trust set up for Ballinacurra’s Cian Twomey who was diagnosed with a rare form of cancer different from Aaron’s) on Saturday, 5 August from 10-11.30am.
In just over a week the Two Mile Inn, Midleton will hold a fundraising Dance for Aaron’s Hope from 8.30pm to 12.30am on the Saturday, 12 August. Admission for the event is €10 and performers on the night include the Tom Healy band, C and M band, Pat Tobin band, Bachelors in Trouble and guests.
A GoFundMe account can be found under Aaron’s Hope, with more information available at the Aaron’s Hope Facebook page.

Castlelyons Prepares for Reunion of Memories and Nostalgia