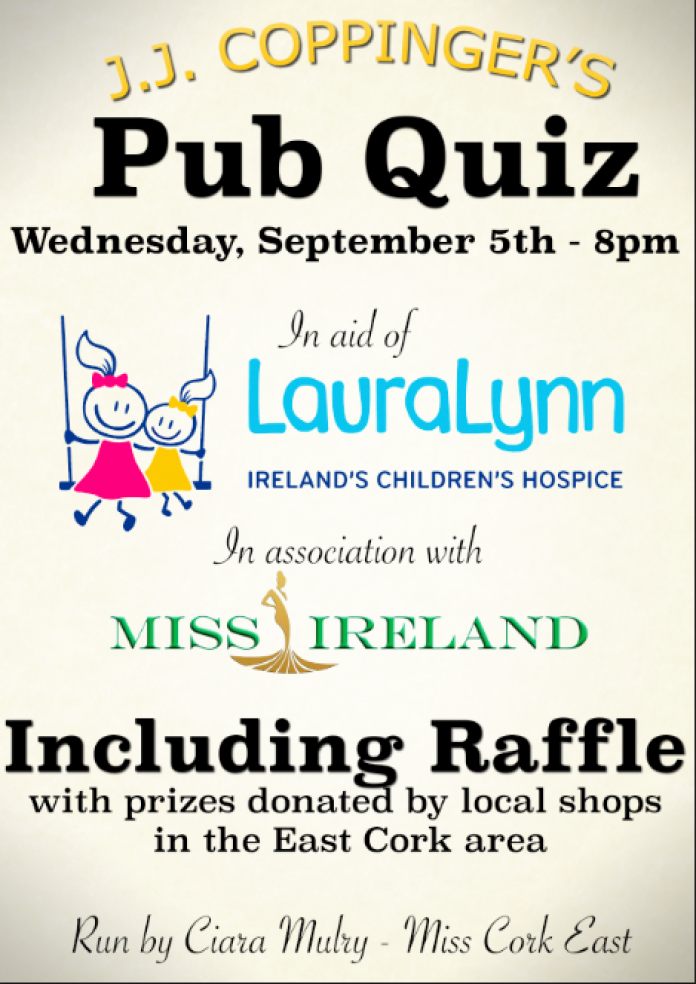 Miss Ireland hopeful Ciara Mulry from Saleen, who is a fourth year business student at CIT and currently working as a Chef at Midleton Park Hotel.is raising funds for the Laura Lynn foundation by running a table quiz at JJ Coppingers Midleton at 8:00pm on Wednesday 5 September.   Ciara who was crowned Miss East Cork just last week, is in the running for the national title to be decided in Dublin next month.   As a contestant, Miss Ireland hopefuls are encouraged to raise funds for the pageant’s chosen charity, which this year is the national children’s hospice.

Laura Lynn, is Ireland’s only children’s hospice, providing palliative care to children with life-limiting conditions and their families from the point of diagnosis to end of life and throughout bereavement.   Since winning a place in the national final, Ciara has gone straight to work preparing for the competition of her life.   With a little help from a team of professionals, the 22 year old from Saleen is gearing up for the final in the Helix on Sunday 16 September.  The East Cork woman is hoping to be given the opportunity to represent Ireland in the Miss World Pageant this December.   The International Miss World competition takes place this year on 8 December in Sanya China.

If selected at the national finals in Dublin’s Helix on the 16 September, the CIT Business student hopes to use her status to promote gender equality, encouraging young women to pursue their dreams.  “It would be great to encourage women into further education and not shy away from job opportunities just because its male dominated. People shouldn’t shy away from jobs just because there seems to be more men than women in the industry, but it still does happen” Ciara tells the East Cork Journal.

Preparing the Saleen native for the final are a team of professionals who include So Amazing Couture, Platinum Hair, Suzanne Jackson Dripping Gold tan, R&R Fitness and Vanity X Makeup Academy.   Ciara has also worked with Brighter Communities her chosen charity.

Competing on the international stage can be very stressful the 22 year old says “exercise and a good support network” has helped to maintain a level head.

The East Cork woman added “it does make a difference when you have your friends and family behind you.”

Since its beginning in 1947 we have won the overall title of Miss World only once, when Roasanna Davidson was crowned.in 2003

Could Ciara be the first Irish winner? Only time will tell.

Red Bow Ball in Aid of Time for Tilara Launched this...