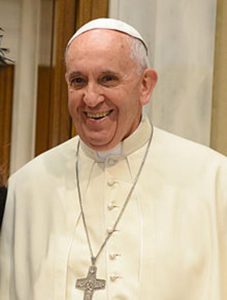 Spike Island and Fota Wildlife Park have been added to the mix of possible Cork locations for a papal visit next year.
The local authority are at present writing to an Taoiseach Leo Varadkar and the Papal Nuncio Archbishop Jude Thaddeus Okolo to extend an invite to the Holy Father to visit the rebel county.
The move comes following the tabling of a motion by Cllr Frank O’Flynn on Monday 23 October to have the pontiff visit Cork as part of his official visit to Ireland next August for the world meeting of families.
The Fianna Fail Cllr said “we lost out in 1979 we do not want to lose out in 2018” “There was a major stroke pulled by Bishop Casey at the time. He secured Galway centre and Galway race course.”
“Cork County the largest County in Ireland, the second biggest city and one of the key cities in Europe, it’s important that we would secure a visit” he said.
Named after the patron Saint for animals Cllr O’Flynn suggested Fota Wildlife Park as a possible location accompanied by a visit to Spike Island, although the logistics of getting the Pontiff onto the island maybe problematic he said.
Fellow party member Cllr Gearoid Murphy who backed Cllr O’Flynn’s motion said “there are diverging opinions of the Catholic Church today in comparison to 1979.”
He said “the message of Pope Francis is a very positive one within the Catholic Church. Peace, love, understanding and humility is very much something we want to bring to Cork.”
Although Independent Cllr June Murphy said if a visit was to go ahead the pontiff should include a visit to Bessborough to apologise for the church’s treatment of women and children in such institutions.
While independent Cllr Danny Collins said his preferred location would be the Mallow Racecourse as its central location would be accessible to all.
Another option being considered is the newly revamped Pairci Chaoimh.
Cllr O’Flynn said “the Boss filled the house when he came two years ago and no doubt Pope Francis will fill it as well.”
The Apostolic Nunciature, the Vatican’s embassy in Ireland said while it’s expected the pontiff will travel to Ireland for the world meeting of families next August, nothing of the Pope’s travel programme has been decided.
They said a lot would depend on the Holy Father’s health if an Irish visit was to go ahead.

Cork Association for Autism in collaboration with the Gate Cinema Midleton,...